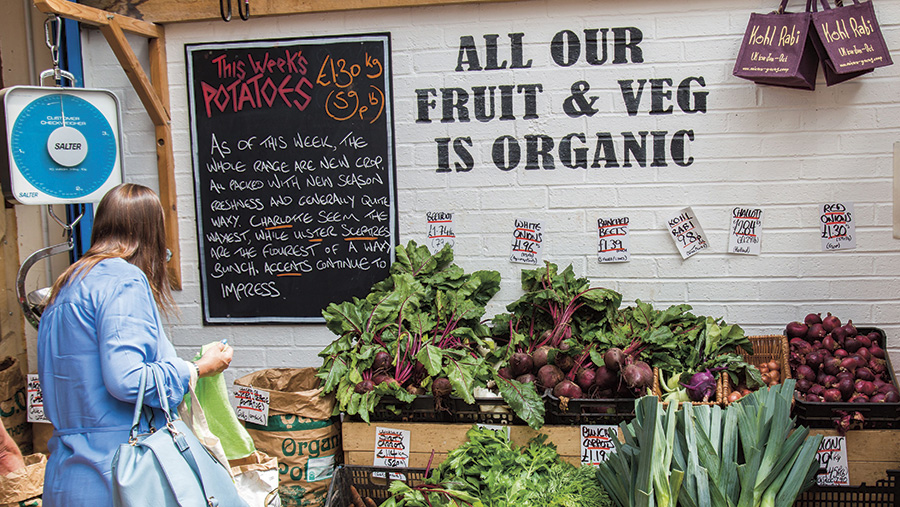 The recession marked the start of tough times for the organic sector, with sales slumping as cash-strapped shoppers turned their backs on organic meat, milk and vegetables in a bid to save money.

The impact was immediate with sales of organic food, drink and other products slumping by 12.9% in 2009 from record highs of more than £2bn/year.

The consequences for the amount of land farmed organically were inevitable – the area dropped and it has continued to do so every year since.

This means that since 2008, when it peaked at 743,500ha, the amount of organically farmed land – a combination of fully converted organic farmland and land under conversion to organic – has declined by almost 30%.

How long does it take to get organic certification?

But while the general trend has been downwards, representative from the sector say it is not all bad news and there are encouraging signs the organic market is back on track.

Steven Jacobs, business development manager at UK organic certification body Organic Farmers & Growers (OF&G), point out that the area of land in-conversion, expressed as a percentage of the total, rose very slightly from 3.59% in 2014 to 3.95% in 2015.

“For me there are a lot of positives in this report,” says Mr Jacobs. “Organic land takes about two years to convert, so if there is even a small rise in in-conversion land it is a vote of confidence going forward.

“It is the first rise, according to the Defra statistics, in in-conversion land since 2007, and bearing in mind that 2007 was pretty much the beginning of the recession, one would think that means we’ve got that behind us.

“It is difficult to say [if this is the start of a turnaround] because in-conversion land take two years to convert. It may take a little before this really shows in the figures for full organic status, but it is really encouraging.”

Hover on the graph to see levels of fully converted and in conversion organic land.

Both figures began falling as the recession really started to hit consumers in their pockets and the sales slide kicked in.

But according to the Soil Association’s annual Organic Market Report 2015 the decline in sales is over – and has been for a while. The report highlighted a 4.9% growth in the UK organic market during 2015, which was the third successive year it has increased.

Sales of organic products in supermarkets, including just a small amount of non-food products, increased 3.2% in 2015 to about £1.35bn, while independent retailer sales increased 7.5% to £308m.

There was particularly strong growth in organic catering and in box schemes for meat and vegetables.

According to OF&G, much of the growth in 2015 can largely be attributed to the return to shelves of organic products that were replaced with discounted produce during the recession.

“What we’ve seen in the last two or three years is that demand for organic produce and retail sales in discount multiples like Aldi and Lidl has risen quite dramatically. Now we’re seeing the other multiples coming back to organic,” says Mr Jacobs.

“And now we’re seeing an increase in in-conversion land. Clearly food producers are confident that the market in this country to going to grow to meet that demand.

“It looks like organic is coming back, and coming back with some force.”

Liz Bowles, head of farming at the Soil Association, agrees there is good reason to believe the growth will be sustained in the long-term.

But she is concerned the growing market is not being reflected more in an increase in UK supply.

“With all the known environmental and economic advantages associated with organic farming – lower costs, lower borrowings, price premiums as well as being better for farm wildlife and soil – it is surprising that more UK farmers are not responding to demand more quickly,” she says.

“There are competitive benefits in organic dairying and arable farming compared to non-organic as well as good markets for organic arable in the UK, especially for breadmaking wheats.

“Farm Business Survey data for England and Wales, analysed by the Organic Research Centre and the Soil Association, shows the financial performance [farm business income] of organic farms on average outperformed that of comparable non-organic farms between 2006 and 2015. There was an average annual advantage in this period of £28-£68/ha for organic farmers over their non-organic counterparts.

“With good prices, stable support payments and a healthy demand for organic, the future of organic farming is looking positive.”

Despite the positivity, government support for organic production in the form of stewardship schemes partially funded by the EU is essential if the sector is to fully recover, says Mr Jacobs.

“You can’t just turn organic farming on like a tap. Farmers need help to get through their first years when they’re in conversion, getting used to organic farming as a practice, and not yet getting a premium.

“With the weather and the markets, to manage conversion to organic on top of that is very hard. It’s an additional risk and it does need support.”

Some English organic farmers benefit from the organic entry-level scheme – part of the previous Rural Development Programme (RDP) – and the Countryside Stewardship scheme under the latest CAP.

Support across the farming sector, including organic, has been reduced by Natural England under the current CAP, says Mr Jacobs.

“It is clear from the experience of food and farming in other parts of Europe that increasing government support helps to grow the rural economy providing more viable businesses and better employment opportunities.

“And at a time when food and health are being so closely scrutinised and commodity prices taking a tumble, globally supporting quality food produced domestically is certainly worth encouraging,” he adds.

The prospect of Britain leaving the EU also raises questions, he says.

“Certainly we’re concerned. Leaving the EU would present some challenges and some risks – certainly to farming and to organic farming in particular.

“Whether we stay in or leave, we’d like to see some assurances from Defra that it will continue to support domestic production for all farming.”

Suffolk farmer John Pawsey converted his first block of land to organic in 1999, completing the job in 2007.

Bucking the trend seen in the latest Defra organic farmland figures, Mr Pawsey has actually expanded his organic operations. In the past 18 months, the organic land he oversees has increased by about 400ha.

Given the opportunities that lie in organic, Mr Pawsey is surprised more conventional farmers aren’t considering a switch to organic.

“It does surprise me,” he says. “There were two in-conversion events recently and both were cancelled because of a lack of support.

“I find it staggering. For example, we’re importing 70% of the organic feed we give to animals,” he says.

“I’d advise people to get on with it, convert to organic, and take advantage of the opportunities.”

Conventional farmers need only look at the organic model he and many others employ to see the benefits of converting, he says.

“When we pitch against conventional farmers for management tenders we usually come out about the same. But what you have to take into consideration is that the working capital on an organic farm is far less,” he says.

“When you take this into account, and the £30/ha you get for maintaining organic land, you can definitely say organic farmers produce better returns.

“We need to start shouting a bit louder about the financial potential of organic farming,” he adds.