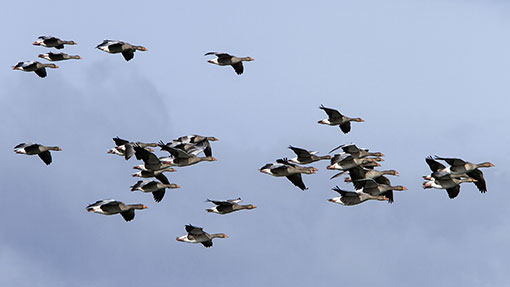 A growing resident population of 20,000 Greylag geese is changing traditional farming practice across the Orkney islands and costing producers thousands of pounds a year.

The resident population is boosted by up to another 65,000 migrating birds over the winter and most of Orkney’s 550 farmers now suffer a financial impact from grazing geese.

Many farmers have started sowing barley later than they used to because the birds decimate the brairded crop in mid-April and livestock have to be housed for longer because the geese graze the grass bare over winter. Producers say that growing turnips has become a pointless exercise because none are left for farm stock.

And some farmers are now turning to different crops in an attempt to beat the birds.

William Harcus farms 405ha (1,000 acres) near Kirkwall with his father, Scott. They started growing oats last year because they discovered the geese didn’t feast on the crop as much as they did on barley.

“Over the winter there are 900 geese on the farm every day, dropping to 200 in the summer, and they’re compromising the way we’re able to farm,” William explained.

“We have 600 acres near the water that is out of bounds to certain crops now. That puts a huge constraint on the business and requires a lot of management.

“We work gas guns and use flags and shoot under licence. It’s a real battle, and when you are lambing, calving, turning cattle outside and working 16- to 18-hour days you don’t have time to keep the geese off the fields.

That’s when they do the most damage. We’re all for wildlife but this is too much and there’s no compensation.”

According to Brian Moss, a farmer on the East Mainland, it was a novelty to see a goose 20 years ago.

“They were considered rare. But the novelty wore off a long time ago,” he said.

“They eat my silage grass and leave only their dung behind and I estimate they’re costing me at least £5,000 a year in extra fertilisers and sprays to help my crops recover from their impact.”

Greylags are a quarry species so can be shot in season. Scaring tactics are also allowed at other times of the year and a limited cull of the resident birds has been introduced.

Last year, some butchers were licensed to sell goose meat on Orkney. However, many farmers reject the popular “goose burgers” and sympathise with Mr Moss.

“I wouldn’t touch them,” he said. “They cause me too much grief when they’re alive.”