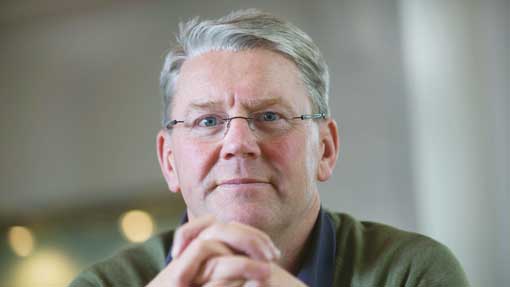 After years lobbying government as NFU president, Peter Kendall has taken up a new role as head of AHDB. Johann Tasker talks to him about his plans to help farmers become more competitive.

Peter Kendall outlined his vision for the Agriculture and Horticulture Development Board at Stoneleigh Park on Monday (28 April).

Mr Kendall was appointed AHDB chairman for a three-year term earlier this month.

The former NFU president addressed staff at the organisation’s new HQ, which will be handed over to the AHDB next month. Employees are due to move into the new building this autumn.

Describing the amount of work going on at the AHDB as “massively impressive”, Mr Kendall said he was genuinely excited at the opportunity to become involved with the organisation.

Becoming AHDB chairman was never part of the plan once he had left the NFU, he said.

But it fitted his desire to do something he believed after “banging on about the importance of the farming industry” during eight years as union president.

Farming faced many challenges, said Mr Kendall. They included feeding a growing world population, climate change, increased constraints on farm inputs and the value of the whole farming industry to the UK economy.

“Following that mental soul searching, I concluded that AHDB was, and must be, the vehicle to provide farmers with the tools to grow British agriculture,” said Mr Kendall.

Raising the competitiveness of British farming was central to the AHDB’s work, he added.

So too was transferring knowledge from the science laboratory to the farm – as well as encouraging continued innovation across all agricultural sectors.

“That is quite a stark challenge,” he warned. Even so, big improvements were possible when it came to increasing the competitiveness of agriculture.

The poultry sector had made massive inroads by increasing productivity in terms of feed conversion ration (FCR) by 1% per year for two decades.

A huge difference would be seen if beef reduced its FCR by just a fraction of that amount.

Meanwhile, ramping up dairy herd performance could add £450m to the value of farm output, according to DairyCo statistics.

British strawberries that hit supermarket shelves in early March this year were the result  of massive investment in innovation and new technologies by the horticultural sector.

New technology has contributed to a 150% increase in the area used for soft fruit over the past 15 years, Mr Kendall told AHDB staff. Much of this investment came from AHDB-driven work, he said.

“I know that might seem strange because I have been banging on about putting more British food on more British plates, but I do think it makes sense.

“The more demand there is for levypayers’ products and services, the more confidence they will have to invest in their businesses for the long term.”

Mr Kendall said he believed the prospects for exports were unbelievably positive. World demand for wheat, for example, was expected to increase by 15% over the next eight years.

Demand for pigmeat was expected to increase by 16% over the same period. And imports of beef to China were forecast to rise by as much as 15% annually for the next five years.

“China’s middle class – and I went away and checked these numbers after someone gave them to me – is set to grow to 40% of the population, up from 10% now, in only six years.”

Demand for food was expected to rise too in Mexico, Indonesia, Nigeria and Turkey – the so-called MINT countries, said Mr Kendall.

“These are staggering opportunities – not just for me as a farmer, but for this organisation as well. The warning is that we are not the only ones eyeing up these opportunities.”

Countries such as Australia also recognised the potential. They were “queuing up to develop brand Australia” – and increase their presence in China, South East Asia and the Middle East.

The Irish had similar plans – and were targeting the British market, said Mr Kendall.

“Exports are an opportunity for us but other people see it the same way, he added”

In recent years, China had become the biggest market for UK pigmeat exports, accounting for 57,000t or 20% of UK shipments.

Another example of the “fantastic potential we have as a farming industry” was the £30m of seed potatoes exported every year – with 40% purchased by Egypt.

As an organisation, the AHDB should not be afraid of being ambitious, said Mr Kendall, who called for stretching targets focused on helping farmers and their businesses.

Farming’s six sector bodies that operated under the AHDB umbrella should work more collaboratively, rather than competing against one another, he said.

“Why? Because the prizes are so significant if we get this right. As an organisation, we need to be really proud of the difference the AHDB makes. We should stand up and convey the messages to levypayers about the work we do.

“We have a great story to tell and great stories of levypayers in action and I want in my time as chair of this organisation to give a profile and leadership to that work.”

Analysis: Kendall to ‘sweat every asset’

Peter Kendall’s appointment as AHDB chairman marks a swift return to employment after he stepped down as NFU president less than two months ago. But his new role is much different, writes Johann Tasker.

Mr Kendall’s office is less than a five-minute walk from the NFU HQ building at Stoneleigh Park, Warwickshire. But the Bedfordshire farmer told Farmers Weekly this week he had made a clean break from his recent past.

“I know there have been one or two comments made about my appointment – that he’s wandered over here from over there and he’s going to carry on doing the same old stuff,” said Mr Kendall. “I have heard it said already.”

The truth is more complicated. Mr Kendall’s position as AHDB chairman is apolitical. This means there will be no more lobbying government ministers for a better deal for farmers. Instead, his job is to ensure levypayers get the best value from any deal they are dealt.

“In the past job, there was a lot of lobbying about trying to change the image of farming and getting the government’s perspective to change. What is very clear to me is that this job is about providing farmers with the tools to be more competitive and productive.”

Part of that strategy will see 290 staff from the AHDB’s six sector bodies brought together in a single building for the first time since the levy board was formed in 2008. Currently split between three separate buildings on site, staff are set to move into the new building this autumn.

“There is a lot of history in the individual sectors,” said Mr Kendall. “Levypayers see those sectors as having their money to spend on their behalf. I am absolutely convinced that agriculture will benefit from trying to sweat that money to get as much collaborative working as possible.”

Trying to convince levypayers that collaborative working was the best way forward would be a challenge, acknowledged Mr Kendall. But it would be more beneficial to have scientists and researchers brainstorming ideas and working together than sitting in separate silos.

In a further value-for-money move, the new HQ has been built by LaSalle Investment Management which manages the Stoneleigh Science Park. It will be leased by the AHDB for the same cost per square foot as the board currently pays for its three separate buildings.