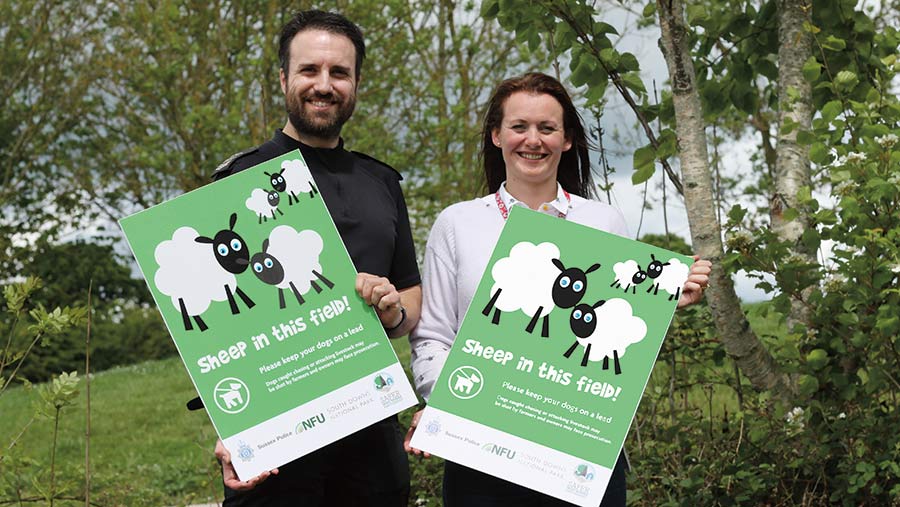 DNA testing kits and information posters are being rolled out by Sussex Police as efforts are stepped up to clamp down on livestock worrying.

Law enforcers have also teamed up with West Sussex County Council (WSCC) to hold a series of education seminars, to better inform the public about their responsibilities when exercising dogs in the countryside.

Sgt Tom Carter, who leads nationally on livestock worrying, told the most recent seminar at Binsbury College in West Sussex that “dogs are basically domesticated wolves”.

Despite many years of breeding and often diligent training, the traits to hunt and kill can still be triggered.

“In a field of sheep, the red mists come down, and no matter how much the dog walker wants to get it back, it will ping from sheep to sheep like a pinball,” he said.

Sheep worrying can happen even if the dog is on an extendable lead, as sheep can still miscarry simply from the stress, costing farmers thousands of pounds in lost revenue.

Sgt Carter explained DNA kits are about to be issued to crime scene investigators in Sussex, as part of a national roll-out by the Met.

“They will be used for things like deer poaching, hare coursing and sheep worrying,” he said.

Bite marks will be swabbed and any dog saliva will be DNA tested. This could provide proof of responsibility if a sample is collected from a suspect dog.

But even where this is not possible, lab tests can still narrow it down to the species and sub-species of dog.

As for the poster campaign, WSCC principal community officer Fiona Baker explained the “Sheep in this field” posters were being distributed via parish councils, NFU offices and other contacts, and were either downloadable or available on request.

One dog owner attending the seminar, Adele Leslie from Crawley – who also works as a professional dog walker – said she and most other dog owners were generally responsible and always put their dogs on leads when near livestock.

But not everyone was, she agreed, and she supported the idea of using even more graphic images of injured sheep on posters to shock people into controlling their dogs.

“Responsible dog owners are already doing this. But for those who don’t, they really need the message shoved in their faces,” she said.

Ms Leslie said that, prior to attending the seminar, she was not aware that stress alone was enough to trigger miscarriages in sheep.

What are a farmers’ rights over sheep worrying?