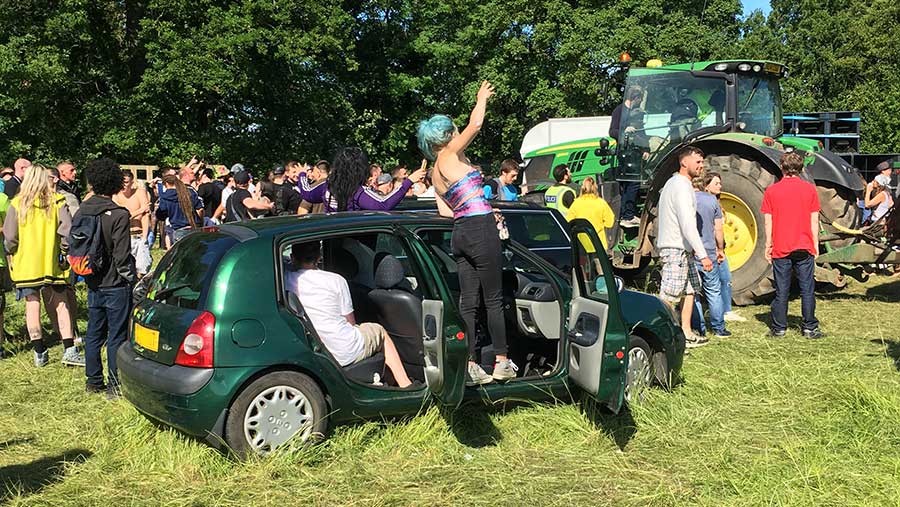 A farmer has accused police of using “heavy-handed tactics” after his neighbour was dragged out of his tractor and arrested for trying to disperse an illegal rave on on his farm.

Cambridgeshire tenant arable farmer David Rolls asked his neighbour to help evict more than 100 illegal ravers from his field with slurry, after the police stood by and did nothing for more than eight hours.

Mr Rolls said he awoke at about midnight on 4 June to find a huge crowd had broken into his 40ha gated field, situated between Arrington and Longstowe, to set up an illegal rave.

He contacted police, but said they did nothing other than warn Mr Rolls against taking measures to protect his land.

After his threat to block the ravers in at 9am the next morning was ignored, he asked a passing neighbour if he could use his slurry tanker to try and stink the ravers out.

Mr Rolls said the police warned the pair it would be an offence to spray the ravers despite the fact they were trespassing.

Instead, Mr Rolls’ neighbour drove his tanker into the field and spread the slurry a distance from the ravers, “creating an awful stink”.

However, while the neighbour was driving the tractor it bounced over a large gas canister belonging to the ravers, which was hidden in a of pile rubbish. Officers then moved in to arrest him.

Revellers have posted a video of the arrest on YouTube. The 40-second clip shows a group jeering as police dragged the handcuffed farmer out of his tractor cab.

Mr Rolls told Farmers Weekly: “The police rushed into his cab, grabbed him, arrested him, dragged him out and threw him on the floor.”

The neighbour, who is in his late 50s, was taken to Parkside police station but later released without charge.

Cambridgeshire Constabulary have defended their actions, saying the incident was dealt with in a “proportionate” manner.

The force explained to Mr Rolls they would not break up the rave as people were likely to get back in their cars while drunk or high on drugs.

But Mr Rolls said: “I think the response from the police was pretty poor. I wouldn’t have wanted any of them to get back in their cars and cause an accident.

“The simple solution would have been to block the field and make people walk out, giving the police the opportunity to breathalyse them and stop them driving away.”

Police could also have confiscated all the equipment, he added. But the ravers suffered no repercussions and were allowed to remove their transit-van-sized speakers when they left.

Mr Rolls said the police did not even stop new revellers from entering the field after they were on the scene, leaving Mr Rolls to defend his land alone.

‘Every farmer is vulnerable’

“I never thought I would feel like that. I thought the police would do something, but they didn’t,” he added.

“I’m still in a state over it, it’s eating me up inside. You wake up and think ‘oh s**t’. You feel as though you have been wronged and have nowhere to go.”

While the rave took place on an acre of fallow land which was previously entered into the Entry Level Stewardship scheme. Ravers may also have dropped bottles in a grass crop while walking from their cars.

Mr Rolls, who grows hay to sell locally, said he is likely to lose 10-12ha of his crop as he cannot take the risk it may contain glass which would seriously injure, or potentially kill, the horses it goes to feed.

He is insured for vandalism and will receive a payout for the damage.

“I’d like other farmers to know how vulnerable they are. One of my neighbours has put in 6m margins around his fields, and has no gates. It’s such an opportunity for people.”

Mr Rolls said he is dismayed people have “just turned up and abused” his farm.

“I love my farm. I’ve got nice big hedges, I look after it. I want other people to enjoy it as much as I do. I like people to come on and enjoy the countryside.”

He said he was considering re-entering the land in the scheme, and growing wildflowers on it, but will now plough it and place a heavy bar across the gate to deter future ravers.