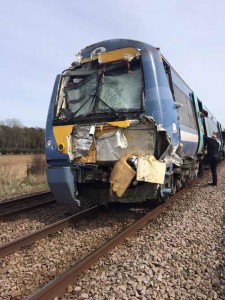 A tractor driver was seriously injured after his vehicle collided with a train carrying 135 passengers at a level crossing.

The 31-year-old man was airlifted to hospital with serious, although non-life-threatening, injuries following the collision on Sunday afternoon (10 April).

The train driver was also taken by air ambulance to hospital after the crash, shortly after 12.30pm at Hockam Road level crossing, in Roudham, near Thetford, Norfolk. His injuries were not said to be serious.

Ten passengers suffered minor injuries, including cuts, bruises and some were treated for shock. Seven were treated at the scene and three were taken to hospital.

The train – the 12.03 Norwich to Cambridge service – was badly damaged, but police said it was not derailed.

Carriages being emptied onto an alternative service shortly, so we're sitting tight for now #greateranglia pic.twitter.com/GH7zi7Xo9C

More than 50 firefighters in eight appliances, four ambulances, one rapid-response vehicle, the Hazardous Area Response Team (Hart), and the East Anglian Air Ambulance were sent to the scene.

Pictures of the crash posted on social media websites, including Twitter and Facebook, showed severe damage to the front of the train.

A number of the train windows were also shattered, sending large shards of glass littering the tables.

Alex Youngs, 30, who was on his way back to London after visiting family in Great Yarmouth, told the Eastern Daily Press: “We were travelling along and all of a sudden heard this almighty bang and the train started shuddering as if it was about to derail. There was glass everywhere and suitcases flying.

“We finally screeched to a halt. It felt like forever, but it took maybe five to 10 seconds before we came to a halt. It was a huge impact. We thought we were going to derail and tip over.

“When we came to a stop there were a few people who were clearly really shaken and covered in glass. Luckily, there was a guy from Network Rail on board who took charge. The conductor and driver were the heroes.”

Caught up in a train smash on the way to Thetford. Everyone seems ok, driver injured but only panic attacks reported pic.twitter.com/aKxt3CypLa

Carriages being emptied onto an alternative service shortly, so we're sitting tight for now #greateranglia pic.twitter.com/GH7zi7Xo9C

Mr Youngs, who works as a web developer in London, said passengers were kept on the train for three hours while emergency services teams treated the injured people.

Tom Smith was also on the train on the way to London to see his beloved Tottenham Hotspur play Manchester United.

He tweeted: “My train just crashed into a tractor on the line, thankfully no one seriously hurt on the train. Hopefully the tractor driver is OK as well.”

He also posted: “@greateranglia Don’t know how the driver survived. He did an excellent job to keep everyone safe. #Thetford.”

Later, Mr Smith tweeted: “I know you were all worried about me, but I should get to the Spurs game on time xoxox.”

The crash happened 11 months after a tractor driver narrowly cheated death when his vehicle was sliced in half after colliding with a train near Knaresborough, north Yorkshire.

The incident prompted a joint safety campaign involving the NFU and Network Rail in a bid to cut accidents at level crossings.