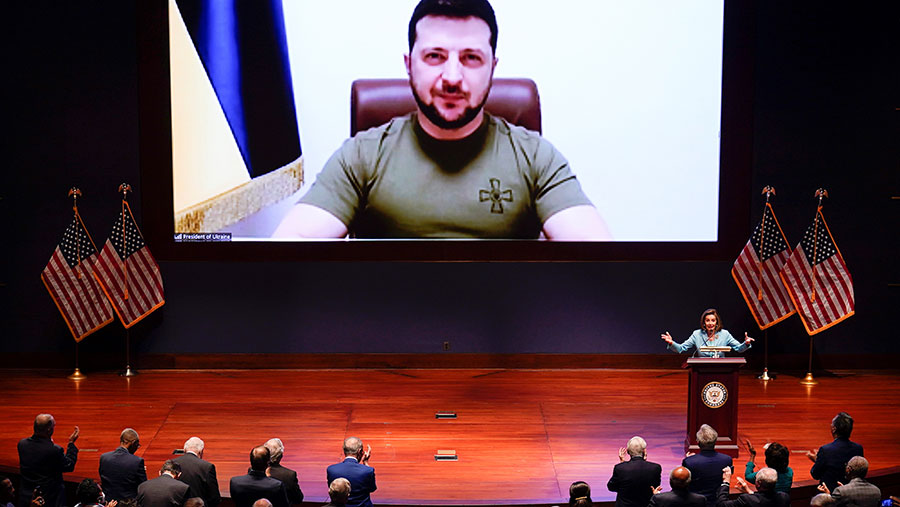 Since the start of Russia’s occupation of Ukraine on 24 February, local farmers have been seizing military equipment worth millions from Vladimir Putin’s army.

Videos of Russian tanks and other military hardware being captured and towed away by farmers and villagers have become almost a daily spectacle on social media.

In his address to the nation on Friday 25 March, Mr Zelensky heaped praise on his country’s “tractor troops” who have seized the latest models of weaponry that Russia “had tried to keep secret”.

Mr Zelensky said Russian “invaders” had met resistance in all areas of Ukraine they had entered, and he urged them to “go home while you can still walk”.

“Every day of our struggle for Ukraine, every manifestation of our resistance in all areas the occupiers have entered so far proves that Ukraine is a state full of life, which has historical roots and moral foundations throughout its territory,” he said.

“That is why ordinary Ukrainian peasants take captive the pilots of downed Russian planes that fall to our land.

“That is why our ‘tractor troops’ – Ukrainian farmers – take Russian equipment in the fields and give it to the armed forces of Ukraine. In particular, the latest models that Russia has tried to keep secret. And now the occupiers leave them on our land and just run away.”

The latest video, uploaded to the Twitter account Ukraine Weapons Tracker (@UAWeapons), shows a Russian BTR-82A armoured personnel carrier being taken away by a Ukrainian tractor driver after the vehicle was captured on a battlefield in Huliaipole, Zaporizhzhia Oblast, by Ukraine’s Territorial Defence fighters.

#Ukraine: This time, the Ukrainian farmers grabbed themselves a ZU-23-2 23mm autocannon from Russian forces. pic.twitter.com/AcNC9ZhAFd

Meanwhile, footage posted to @UAWeapons on 22 March shows the Ukrainian Farmers’ Brigade grabbing another Russian supply truck and towing it away with a tractor in Sicheslav, Oblast.

And Ukrainian farmers also captured a Russian Msta-S tank at an unknown location on 23 March.

Tractors towing away large Russian weaponry have emerged as an unlikely symbol of Ukrainian resistance during the conflict.

According to the Oryx monitoring website, as of Friday morning (25 March), Ukraine had captured almost 370 Russian armoured vehicles, including 122 tanks.