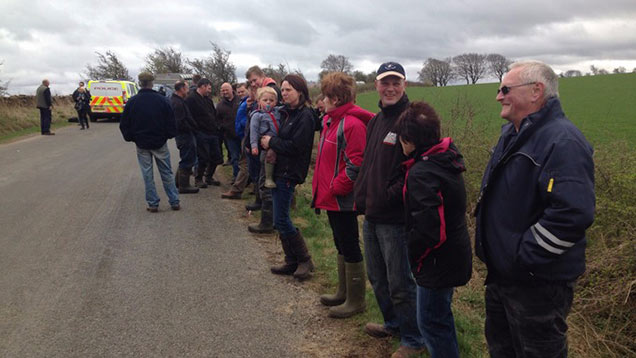 Protesters have blockaded a repossessed farm to prevent prospective buyers visiting the property.

The bridging loan was taken out through UK Acorn Finance and Somerset financier Des Phillips.

Mr Atkinson was evicted from Birks Farm in February this year. He owed £3.5m after taking out a loan of £1.45m in October 2010.

The protest at the farm, on Wednesday (15 April), came as Mr Atkinson called for greater protection for businesses taking out high-interest loans.

Commercial loans of more than £25,000 are unregulated.

“I was given a bridging loan with a promise of getting us on to long-term cheaper finance,” Mr Atkinson told the BBC.

“The bridging finance came to an end and there didn’t seem to be any progress being made.

“A period of months elapsed and then I eventually got letters to say this loan had to be settled immediately or they would take possession proceedings.

“I was determined I wasn’t paying any more money once the bridging loan had finished.”

In a statement, UK Acorn Finance said: “The allegations made by Mr Atkinson in respect of the lending and against both UK Acorn Finance Limited and Mr Phillips personally have been litigated unsuccessfully by him.

“An order for possession of the property at Birks Farm was made in UK Acorn Finance’s favour at Carlisle County Court in January 2014.

“Whilst Mr Atkinson lodged an application for permission to appeal the order, he chose to withdraw his appeal in June 2014.”