Small farmers constitute the backbone of British agriculture, but face myriad challenges. In an exclusive article for Farmers Weekly, HRH The Prince of Wales explores the contribution they make, and explains why support initiatives are so important.

I suspect that gazing into a crystal ball at this time of year, even among all the seasonal good cheer, has always been somewhat unsettling for members of farming communities.

The vagaries of the weather and of markets, combined with concerns about the health of crops and livestock, not to mention questions about the availability of seasonal labour, and whether equipment can be relied on to make it through another year, provide enough uncertainty to make even the hardiest pause for thought.

That may always have been the way of things for those who make their living from the land but, based on my travels round the country, the range and scale of current uncertainties seem to me to be of a different order and leading to widespread concern about the future.

In an increasingly uncertain world, those concerns are not only for the welfare of the farmers involved and their families, important though that is.

The whole of society has a direct and significant interest in the well-being of the farming community. 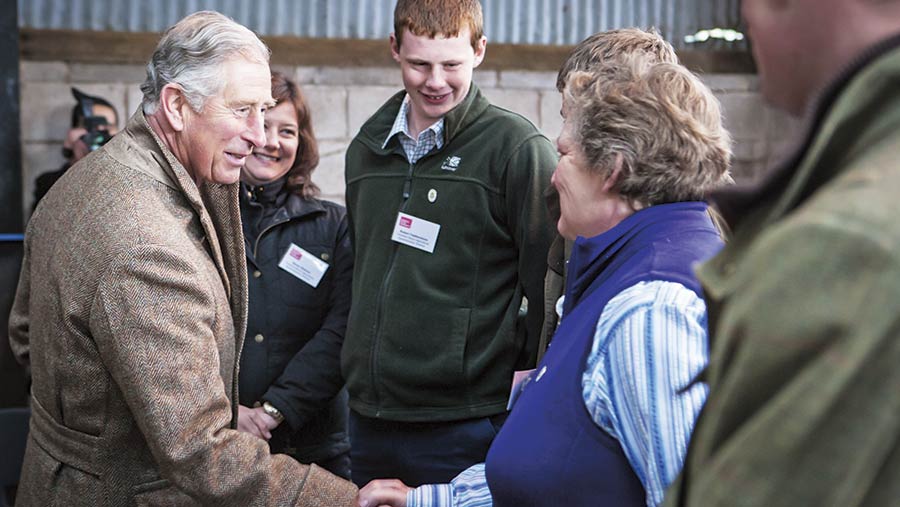 It may be a somewhat hackneyed phrase, but farmers are in a very real sense the custodians of rural land and of our much-loved landscapes.

They and their families also form the backbone of their communities.

Many other groups have a variety of interests in what happens in the countryside, and that is a good thing.

But it is generally only farmers who are on their land in all weathers, every day of the year, and they understand it in a way that others never will.

There is, of course, a need to adapt and change, but the only farmers who absolutely can neither adapt nor change are those who have been unable to continue.

The need to increase resilience against the whole range of economic and other uncertainties facing the sector must surely be of overriding importance for all farmers, regardless of the scale at which they operate, but in my experience the smaller family farms are the most vulnerable and therefore need the most help.

That is why my Countryside Fund has set up its Farm Resilience Programme. Launched in July this year, the programme builds on research by the University of Exeter and will support 1,500 farm businesses through a programme of one-to-one support and business workshops.

The Farm Resilience Programme is the most ambitious project we have undertaken so far.

It is targeted specifically at helping those farm businesses that are not currently engaged with local support networks.

There is a particular emphasis on those who are hardest to reach, whether that is because of issues such as isolation, lack of confidence, depression or anxiety – which are sadly not at all uncommon.

We will also be looking to identify those who may lack basic skills, such as computer and machinery training, and those who may simply feel they are too busy to do anything off the farm. These are the people who most need help and support.

Furthermore, the mentors will ensure that these individuals will benefit from the experience of others who well understand the type of business involved.

The feedback from my Countryside Fund’s Dairy Initiative, which over four years has helped more than 300 dairy farmers, has been overwhelmingly positive, with the highlight for many being the session entitled “Managing your bank manager”.

I feel sure that the same format of encouraging local networks, and bringing in expert speakers and consultants to provide practical advice will be equally effective in helping to build resilience.

A resilient and adaptable farming sector has benefits to society that go far beyond the basic elements of food production and custodianship of rural land, yet are less readily recognised and may be worth spelling out.

I am thinking particularly of the strong link to health, of both people and the environment.

Farming practices that build resilience in other ways, such as through minimising the use of antibiotics and adopting less intensive systems of production, with fewer agrochemical inputs and better recycling of nutrients, would also help in producing healthier food – as well as reducing the toxic run-off into rivers and thence into the sea where “dead zones” are formed.

I do understand that farmers have, in the vast majority of cases, responded in an entirely rational way to the economic signals with which they have been presented over the past 70 years.

And when it comes to doing things differently, it is very difficult for an individual farmer – particularly if they are operating at a small scale – to make the changes that in many cases they might be keen to make.

This is particularly the case when at the other end of the food chain is a buyer who is required to purchase significant volumes of food, as a commodity, at the lowest possible price. I know from talking to these buyers that, much as they might like to buy from individual farms, it is simply not practical for them to do so.

It seems to me that one answer to this apparently intractable situation would be to encourage farmers to form local marketing co-operatives which would sell produce of a consistently high standard, at a scale that would be attractive to those who need to buy in volume.

I have long thought that there is an argument for the public sector to purchase local and regional food wherever possible for various reasons, not least that the health benefits might result in savings to the national economy.

I know that this has been done on a small scale, with some success, but at a time of significant change it is surely worth considering a national network in which local hubs of farmers would sell to public-sector operations, such as hospitals, schools, prisons and military establishments. This would reduce food miles, provide increased resilience and security for farmers and provide new opportunities for hard-pressed local economies.

There is no doubt in my mind that a resilient farming sector is of fundamental importance to our economy, to rural communities and to the health of the nation.

It also makes an equally important contribution to the environment in various ways, some of which – such as through providing habitats for wildlife – are well understood.

But it is now, at last, becoming more apparent that there is an important additional dimension to be considered.

Research has shown that soil has a hugely important role to play in the international battle against climate change. Indeed, if the quantity of carbon contained in soils could be increased by just 0.4% per year, the annual increase in carbon dioxide in the atmosphere could be halted.

This may seem an extraordinary claim, but the Quatre pour Mille initiative launched by French agriculture minister Stéphane Le Foll is well-researched and gaining a lot of traction.

Since soil degradation and loss of fertility is a fundamental problem that threatens both sustainable food production and natural ecosystems around the world, this could be one of those rare “win-win” opportunities – particularly if taken together with the prevention of tropical forest loss (and its further restoration) – another cheaper, quicker and easier way of capturing carbon dioxide from the atmosphere.

We should expect a lot of interest in determining the best ways to increase the level of carbon in our soils, but in the meantime this initiative provides yet another argument for increasing the resilience of our farming sector – and perhaps even a little optimism with which to start 2017.