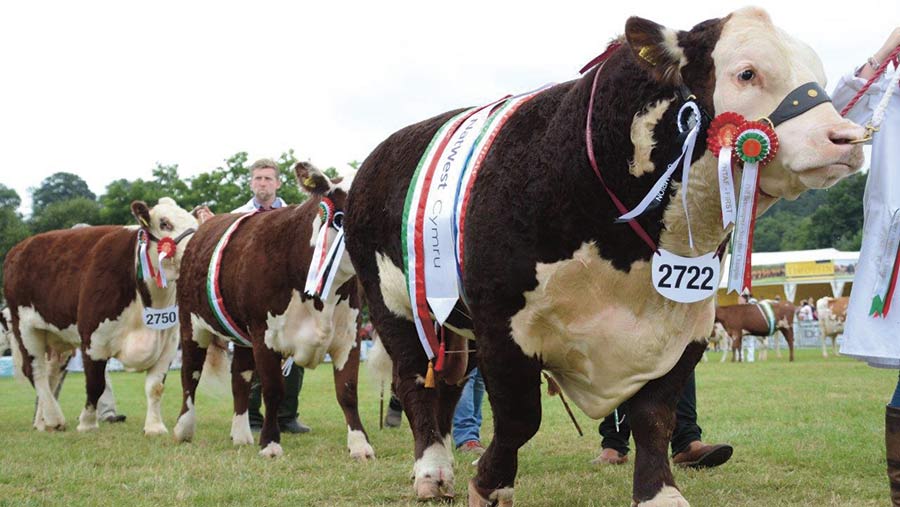 The future success of agriculture in Wales after Brexit will dominate proceedings at the Royal Welsh Show later this month, say farm leaders.

Some 240,000 people are expected to descend on the showground in Builth Wells, Powys, from 24-27 July for Europe’s biggest agricultural event.

Organised by the Royal Welsh Agricultural Society (RWAS), the show provides an opportunity for farmers to let off steam, socialise and see Welsh farming and Welsh livestock and produce at their best.

Organisers say more than 8,000 entries have been entered in more than 1,300 classes, including sheep, cattle, pigs, poultry, goats and other animals (see panel).

As well as showcasing top Welsh livestock, the best of Welsh produce will also be on display, including dozens of stands selling local produce, as well as a variety of displays and demonstrations.

Despite its “royal” moniker, no member of the royal family is scheduled to visit this year’s show.

However, Welsh rural affairs minister Lesley Griffiths, chief vet Christianne Glossop and other ministers will attend to talk to farmers and industry leaders about farm policy.

According to the two main Welsh farming unions, NFU Cymru and the Farmers’ Union of Wales (FUW), discussions about the future of Welsh agriculture and how Welsh farm policy will be shaped after the UK leaves the EU in 2019 will be the main talking points.

NFU Cymru president Stephen James said: “The Royal Welsh Show is a great opportunity for NFU Cymru to meet with influential decision-makers to raise the issues that matter most to the industry.

“Welsh farming must be front and centre in all Brexit negotiations and that is exactly what NFU Cymru will push for.”

Throughout the week, the NFU Cymru marquee will host a series of Brexit-themed seminars. These include: Brexit – What next for Welsh farming?, The Future of Welsh Lamb and Beef Post Brexit and Productive Agriculture and the Environment Working Together.

Ahead of the event, the FUW warned that a “hard Brexit”, which would include the UK leaving the single market and tariffs being imposed on domestic food exports, would “sever supply chains, cut off [Welsh] export markets” and trigger “cheap food importation policies”.

Throughout the show, the FUW will continue to reinforce calls for the UK government to adopt a fresh start to Brexit and to aim for a softer exit from the EU to minimise severe risks to the industry.

An FUW spokeswoman said: “Despite all the uncertainty, it is essential that we are proactive in steering discussions which will affect agriculture for a generation and beyond.”

The Country, Land and Business Association will also be hosting a breakfast seminar on Tuesday (25 July) exploring ideas around the future of agricultural policy after Brexit.

A number of lively debates on non-Brexit topics are being planned.

This year, the show coincides with Farm Safety Week. The NFU Mutual marquee will be the venue for a Welsh government farm safety event at 2.30pm on Wednesday, 25 July.

Other seminars will debate how to prevent rural crime, mental health, the changing role of women in farming, rural connectivity, the next generation and succession planning.

Future efforts to tackle bovine TB in Wales, including information on the Welsh government’s new TB policy, will come under the spotlight.

Carmarthenshire will be the feature county this year – for the fourth time since the show settled permanently at the showground in 1963.

Harper Adams University College will showcase an Agri Lab exhibition, including a host of innovative technologies set to change the face of farming in the next five to 10 years.

Matt Coulter, the Kangaroo Kid, a world-class stuntman from the Gold Coast, Australia, will light up the main ring with stunts performed on quad bikes.

The event will also feature the return of Lorenzo “The flying Frenchman” with his horse show, described as a “gripping performance of extreme riding skills and natural horsemanship performed on bridleless horses”.

Visitors can keep up to the date with the latest news by downloading the Royal Welsh Show app for free on iPhone and Android. The app will include maps, attractions, competitions and results.

Once again, visitors will be able to access free wifi hotspots at the showground.

Exhibitors will travel from far and wide to compete in an exciting four days of livestock competitions.

Entries have flooded in for this year’s show, according to Royal Welsh Show spokeswoman Katie Williams.

“Lincoln Red cattle will be exhibited for the first time, and in recognition of the increasing number of Herdwick sheep entries at the show, the breed will have its own section,” said Ms Williams.

“The Elite Junior Bull championship will consider EBV [estimated breeding value] figures and visual traits. It’s about how they perform on farm as well as their visual prowess in the ring.”

You can view the competition schedules online.