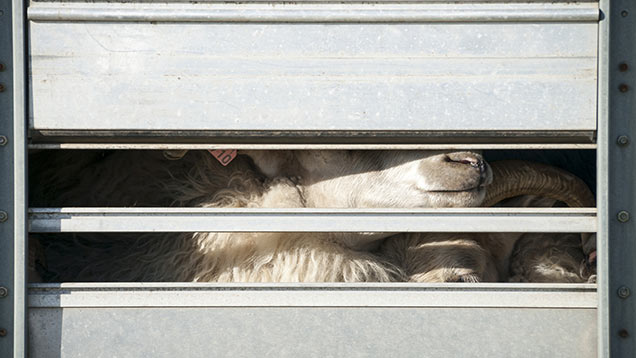 RSPCA inspectors should be allowed access to animals at all ports involving the export of live animals, according to a new council report.

The recommendation was included in a report by Dover District Council, published on 4 March.

The RSPCA has been lobbying both Dover Harbour Board and Defra’s Animal and Plant Health Agency (APHA) to allow its inspectors in to Dover port to monitor the well-being of the animals, as they were in Ramsgate.

“If the port of Dover allow RSPCA inspectors to be present during shipments, we would see greater monitoring of the animals, which could lead to injured animals more likely being identified and removed, and therefore alleviating their suffering.”

Following an incident at Ramsgate in September 2013, more than 40 sheep, considered by RSPCA officials as lame, were put down.

The animal welfare charity hailed the findings of the council report as “significant” and said it could help improve the lives of thousands of farm animals, such as sheep and calves, transported through Kent ports.

The report states that animal welfare is paramount and animals should be not be classed as “goods”. This principle provides a “useful foundation for future decision-making in Dover and at the port”, the charity said.

The council also urged the responsible European and British authorities to better enforce existing regulations relating to the transport of live animals.

The RSPCA said experience has highlighted that problems can and do occur after loading.

However, pressure from the council for British and EU authorities to better enforce regulations could lead to 100% checks at the port and ensure the live exports industry operate in a legal manner.

Lenny Rolles, RSPCA senior parliamentary adviser, said: “If the port of Dover allow RSPCA inspectors to be present during shipments, we would see greater monitoring of the animals, which could lead to injured animals more likely being identified and removed, and therefore alleviating their suffering.

“Other potential problems such as faulty tiering in the lorries or a broken ventilator could also be more likely to be spotted and rectified before the lorries leave our shores, providing greater protection of the animals for the remainder of their journeys.”

Live exports resumed from Dover port in May 2013, following two years of exports from Ramsgate port in Kent.

If the council were successful in gaining government support to amend the Harbour, Docks and Piers Clause Act 1847, ports such as Dover could have the discretion to refuse the trade in live farm animals.

The charity said it hoped the government would listen and act on the recommendations of the report.

The RSPCA wants to see an end to the live exports of farm animals for slaughter. It said it would push for better enforcement of the regulations “until that day comes”.

However, the NFU has insisted that live exports are a “perfectly legal, legitimate and valuable trade” for English farmers.

NFU south-east spokesman Frank Langrish, a sheep farmer and haulier, said there was increased demand from Europe for both UK breeding livestock and animals destined for the food chain.

Dover District Council’s scrutiny (community and regeneration) committee led on the report and invited written and oral evidence from key stakeholders, including Dover Harbour Board, Kent Trading Standards, NFU and the RSPCA.