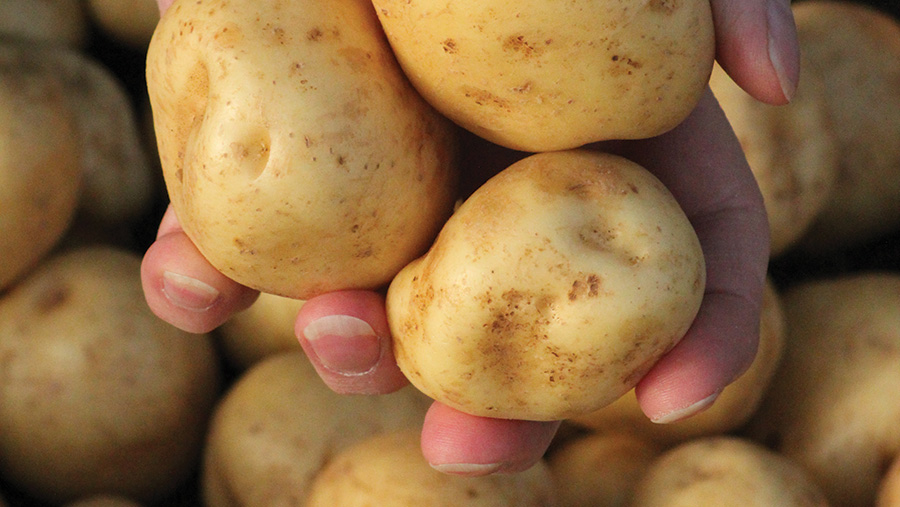 A loophole which has seen English seed potato used to grow Scottish ware potatoes needs to be closed off, growers attending this week’s AHDB Seed Potato conference at St Andrews have been told.

It has become apparent in recent days that 18 crops of ware potatoes in Scotland this season were grown from seed imported from England.

Furthermore, 12 of these crops were allegedly grown from stocks supplied by a grower who is not a member of the voluntary Safe Haven scheme, designed to assure seed purity.

See also: 7 expert tips to get the most out of your potato seed

The crops may represent less than 0.5% of the Scottish acreage, but the major fear is that the seed may have come from stocks supplied from the continent and could bring the notifiable diseases brown rot and ring rot north of the border.

The crops planted in 2016 do not appear to have been carrying infection, but the practice was criticised by Norfolk-based seed grower Tony Bambridge.

“We could survive on imported seed from the continent, but it would not be a good place to be,” he added.

“Seed is too often an afterthought in conversations with retailers and processors. Ignorance is too often our Achilles Heel.”

The importation of certified seed is not illegal under EU rules, raising the temptation to use it as a means of multiplying varieties much more quickly than through propogation in Scotland from micro tubers.

The last time this issue emerged was in 2010 and the concerns were compounded by the discovery of the bacterial disease dickey solani on some stocks.

UK seed exporters could be looking at a record year for trade, according to AHDB head of export development, Rob Burns.

“The harvest looks to have a good seed fraction. This means we could see a higher volume of seed potatoes exported from the UK, up from 80,000t last export season.

“Once more Egypt will be a key market; we are likely to see in excess of 50,000t sent over there.”

Brexit is also likely to impact on future trade, said AHDB head of exports Peter Hardwick, including to markets beyond the EU.

For example, all potato trade to and from Egypt is currently tariff free, carried out under an EU trade agreement.

Post-Brexit, this would have to be replaced by a UK/Egypt bilateral arrangement.

“This is entirely possible, but the existing 355-page agreement, covering all goods from felt hats to ladies garments would have to be replaced,” Mr Hardwick said.

He questioned whether there were enough resources within the Department for Exiting the European Union to cope.