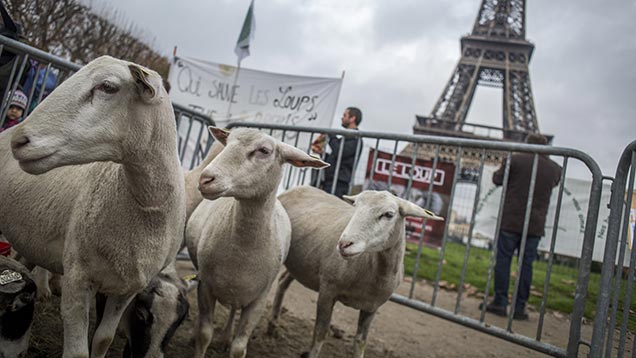 French sheep farmers protesting against increasing wolf attacks have released a flock of 250 animals at the foot of the Eiffel Tower.

Angry at what they call the “overprotection” of wolves by the French government, farmers took extreme action on Thursday (27 November) to highlight their plight and demand more control over the growing wolf population.

Following the protest at the tower, farmers took ewe carcasses and orphaned lambs to the agriculture ministry in Paris, in an attempt to meet French agriculture minister Stephane Le Foll, but riot policemen blocked their access.

“We wanted to show authorities how absurd the wolf is. And since we can no longer protect our flock, we are going to ask the government to keep them.”
Serge Preveraud

National Ovine Federation president Serge Preveraud said: “We wanted to show authorities how absurd the wolf is. And since we can no longer protect our flock, we are going to ask the government to keep them.”

One farmer spoke out, saying: “We’re fighting to eliminate this beast.” Others wore placards with the message: “Livestock and wolves are incompatible.”

But despite this, sheep farmers are only allowed to kill 24 wolves a year.

Now they want wolves removed from sheep breeding regions, the right to shoot a wolf that is attacking a flock and the cull quota to be raised or scrapped.

But the French government, who spent €15m (£12m) in 2012 on wolf attack prevention and compensation, insist the measures in place are good enough and that it is also trying to protect the wolf population.

Patrick Boffy, head of an organisation to help protect wolves, bears and lynx in the Southern Alps, said farmers should just leave steep, rocky terrain and learn to cohabit with wolves in other areas.

The wolf almost became extinct in France in the 1930s, but, protected under EU law, re-entered the country from Italy in the 1990s and today’s population is an estimated 300.