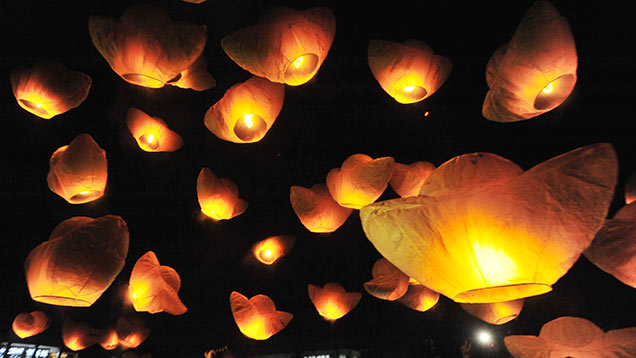 Ahead of the harvest and haymaking season, the council said it had “ramped up” its crackdown on sky lanterns and would ban them from all licensed events in the borough.

Les Gilbert, the council’s cabinet member for communities, is set to ban the launch of candle-lit “Chinese” lanterns as part of the conditions of any hire and event licences granted by the authority.

Sky lanterns consist of a paper-covered wire or bamboo frame and an open-flame heat source that can float in the sky for long distances.

But when they land they can pose a serious threat to livestock, property and farm machinery.

“These lanterns are a menace and cause real misery to farmers, their livestock and wildlife,” said Cllr Gilbert.

“We have listened to the concerns of local people and will impose a ban on sky lanterns being launched from any of the events licensed by the authority.”

The council’s trading standards officers will also pass on the message to shopkeepers that they should promote an alternative to sky lanterns – and inform them they are banned from Cheshire East-licensed events.

“While these lanterns are undoubtedly a popular and beautiful sight, the potential damage they can cause is significant.”

Farmers and landowners have called for a ban on sky lanterns in the UK following cases of livestock being injured or killed from eating lantern parts or getting entangled in the wire frames.

The Chief Fire Officers Association called for an urgent review on their use following a huge fire in Smethwick, West Midlands, in 2013, which took 200 firefighters and 39 fire appliances to control and extinguish. Video footage showed a sky lantern was the cause.

Earlier this year, the NFU launched a letter-writing campaign urging people to write to their councils with a request to ban sky lanterns.

A total of 25 councils in England, including Hampshire, Essex, Oxford and Birmingham councils and the majority of Wales’ 22 local authorities, have banned sky lanterns.

Spain, Malta and Austria have already banned the use of sky lanterns. Tesco stopped selling them in 2012.