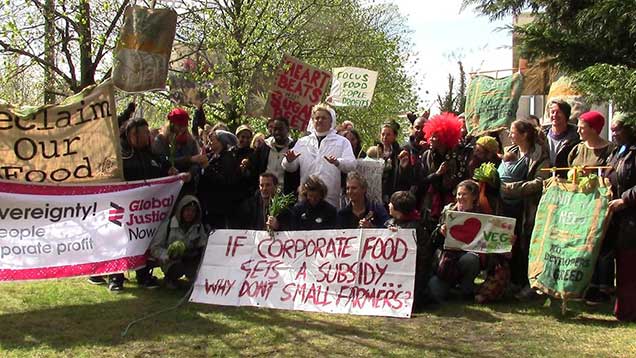 A group representing small, sustainable farmers has staged a protest against British Sugar, demanding a “fair deal” for small producers.

About 50 activists from the Landworkers Alliance (LWA) gathered outside British Sugar’s factory in Bury St Edmunds on Wednesday (29 April).

Farmers from across the UK were joined by New York-based performance artists “Reverend Billy and the Church of Stop Shopping” to oppose the government’s “biased and shortsighted focus on industrial farming”.

LWA branded British Sugar as a “symbol of how broken our current food system is” because the £12.9bn company, a subsidiary of Associated British Foods, controls “all of the sugar processing in the UK”.

The group said changes to agricultural policy had resulted in less support for small-scale producers and a distorted subsidy system that encouraged production on large-scale industrial farms.

Bob Sheppard, an LWA member from Sussex, said: “We want to see a subsidy system that supports farmers to get away from big industrial monocultures.

“The future of farming is in local, healthy, sustainable agriculture and not in the sort of monopoly that British Sugar represents.

“You can’t grow organic sugar beet in this country and get it processed, and for the beet that is grown, all the profits end up with ABF shareholders anyway. We want the profits to go to local communities.”

LWA claimed 90% of fruit and 45% of vegetables consumed in the UK are imported.

Small producers were in a strong position to increase domestic production of fruit and veg. Yet farms under 5ha get no share of the estimated £3bn CAP subsidy pot which goes to UK farms.

According to its website, British Sugar produces over 1m tonnes of sugar in the UK and an additional 500,000t of animal feed from sugar beet pulp.

A spokesman for British Sugar said: “British Sugar works with 3,500 growers and council tenant farmers to produce and process sugar beet in the UK. This includes many smaller farmers who continue to grow sugar beet as it provides a positive margin for them and continues to support the economic sustainability of their farms.

“Sugar beet is an exceptional, rotational break crop and is eligible for Countryside and Environmental Stewardship points. It has lots of benefits for the farms on which it is grown and, as with any root crop, good soil management removes any issues with soil quality.”