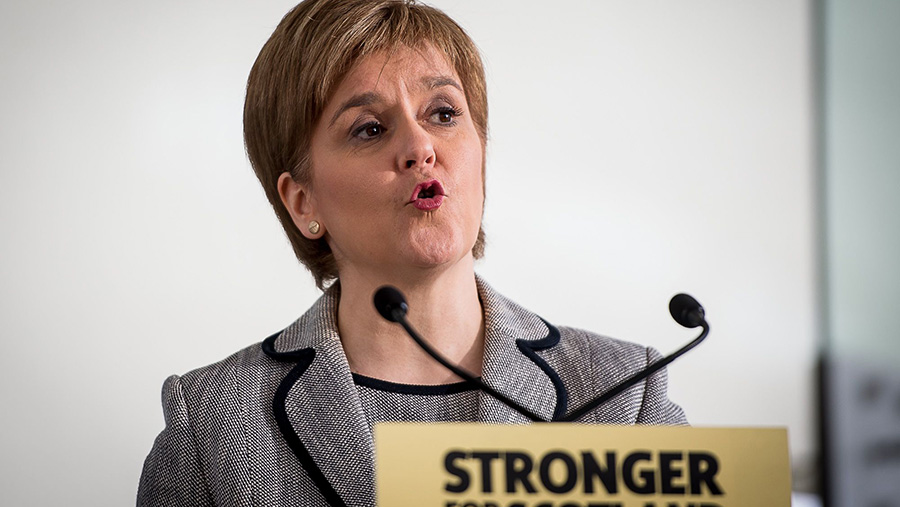 Scottish National Party (SNP) leader Nicola Sturgeon has launched the party’s election manifesto by pledging to “protect the future success of the [agri-food] industry” by fighting for Scotland to remain a member of the single market.

In the manifesto the SNP said there should be “no question” that the Scottish parliament should have full control of EU agricultural funding following Brexit.

And she has laid out plans to bring an “end to the UK government’s great rural robbery” by demanding Westminster passes on all of the compensatory funding it receives from the EU because of the low payment rates in Scotland.

Currently this £194m “convergence uplift” payment is split between England, Wales, Scotland and Northern Ireland, but the Scottish parliament has long argued that the money rightfully belongs to Scottish farmers.

Mrs Sturgeon said: “As our farmers face huge uncertainty on issues like trading tariffs, seasonal migrant workers and the future of rural funding, and the Tories treat our fishing industry as ‘expendable’ once again – we will stand up for Scotland’s rural economy in Brexit negotiations.

“SNP MPs will make sure the UK government guarantees to match the current share of EU funding beyond Brexit and repays farmers their missing millions, including the £160m ‘convergence uplift’  Scottish farmers have been short changed on.”

In its manifesto the SNP makes nine pledges which will impact Scottish agriculture, including to: