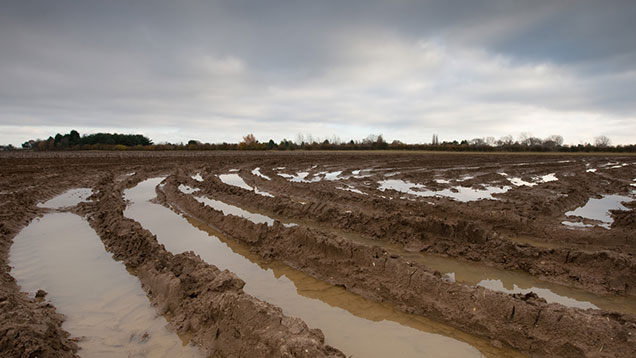 Farmers who suffer soil damage or erosion due to extreme wet weather must not be unfairly penalised under changes to soil protection rules, the NFU has warned.

As part of changes to cross compliance, Defra has announced details of new soil protection standards in England, which came into force on 1 January.

The new guidelines will replace the paper-based Soil Protection Review (SPR), which was viewed by many farmers as largely ineffectual and a “tick-box” exercise.

Rural Payment Agency (RPA) inspectors will carry out more inspections in the field and farmers who fail an inspection could lose some of their single farm payment.

The guidelines contain a stern warning to farmers under GAEC 5 that where soil erosion occurs, they will be penalised even if they have put measures in place. However, the penalty will “depend upon the scale of the problem”.

Richard Wordsworth, the NFU’s national Basic Payment Scheme (BPS) adviser, said: “We want soils to be protected, but we don’t want to see this new approach to impact on the industry.

“We live in an imperfect world where it may rain very heavily in a concentrated period and that’s no fault of the farmer if he has put measures in place to mitigate soil erosion.

“We hope farmers will not be unduly penalised by the practices they have carried out.”

“Late-harvested crops are going to be a challenge under the new regime, soil erosion will be regarded as a breach – regardless of whether preventive measures were taken.” Charles Mayson, Cross Compliance Solutions

Charles Mayson, managing director of Hereford agricultural consultants Cross Compliance Solutions, said: “Late-harvested crops are going to be a challenge under the new regime, soil erosion will be regarded as a breach – regardless of whether preventive measures were taken.

“So maize, potato and sugar beet growers will be hard-pressed in late, wet years to get the crop off without damage. Detailed advice is also given for rowcrops, outwintering of stock, outdoor pigs and poultry and upland situations.

He added: “Pressure to reduce and control erosion will increase. Nitrate vulnerable zone regulations were more lightly inspected some years ago. It’s much tougher now.”

But Defra said the new rules should not place any additional burden on farmers.

A spokesman said: “They have been designed to deliver the same benefits as the current Soil Protection Review, but without the administrative burden of unnecessary paperwork.

“Growers are still required to put measures in place to prevent significant soil erosion, but the need to record actions on paper forms has been removed, saving the industry an estimated £5.3m over the next five years.”