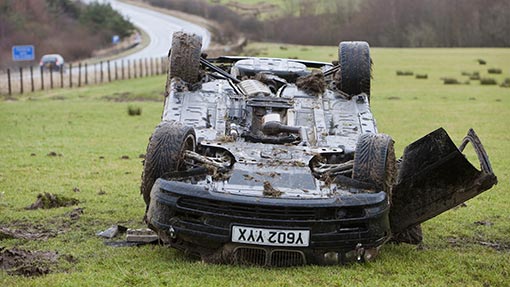 Drivers on rural roads are 11 times more likely to be killed than people driving on motorways, according to latest government research.

Figures from the Department for Transport (DfT) show that country roads make up more than half of road fatalities in the UK every year.

Over the past year, 862 people have died on English country roads and 7,537 people have been severely injured, the DfT said.

Despite the statistics, drivers remain oblivious to danger, needlessly putting themselves at risk of an accident, according to the research.

One-quarter of drivers said they have had a near miss on a country road, while 1 in 20 said they had been involved in a collision in the countryside.

A further 40% said they had been surprised by an unexpected hazard, such as an animal, while one-third also said they had taken a bend too fast.

THINK!, the DfT’s road safety information service, said the findings suggest many drivers are failing to anticipate dangers on the road ahead.

It is launching a new campaign to urge drivers to take more care on rural roads by driving at a speed that allows them to read the road ahead and anticipate hazards.

The campaign is also urging drivers to give cyclists and horse riders plenty of space when overtaking on rural roads.

Road safety minister Robert Goodwill said it was vital motorists understood the risks on rural roads and adapted their driving to the conditions they face,

“That is why the THINK! country road campaign is so important,” he added. “We are urging drivers to read the road ahead, select a safe speed and brake before the bend.”