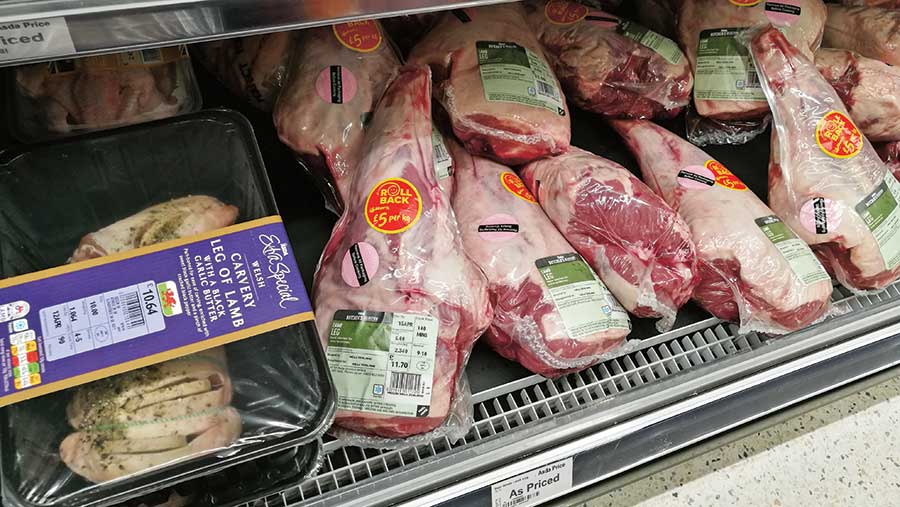 Submitted photograph PLEASE DO NOT RESUE

NFU Scotland (NFUS) has called the level of support for Scottish lamb by supermarkets in Scotland this Easter “a slap in the face” for Scottish farmers.

It added the results of its shelfwatch campaign reveal a “marked decrease” in opportunities for customers to buy home-produce compared with previous years, leaving farmers “appalled and disappointed”.

Their findings reveal despite previous commitments by some supermarkets to back home-grown produce, “huge volumes” of imported New Zealand and Australian lamb line their shelves, leaving many farmers questioning the long-term commitment of supermarkets.

NFU Scotland president Andrew McCornick said: “It’s frankly a slap in the face to many of us that supermarkets have failed to show strong support to Scotland’s sheep farmers and their families over the Easter period – a time of year when consumers seek out our high-quality produce.”

In one Tesco store, underneath a banner proclaiming “The Best Scottish lamb in Season”, a secret shopper found 100 packs of New Zealand lamb, and despite their previous vocal support for Scottish and British lamb, Morrisons, and Lidl were both found to be stocking large amounts of imported lamb.

NFUS has contacted Waitrose to ask why it has not met its previous commitment to source 100% Scottish lamb for its Scottish stores this season, only actually achieving 50%.

Questions to be asked

Mr McCornick said: “We will be asking questions of Morrisons, Marks and Spencer and Lidl, who have failed to maintain their previous good record on domestic sourcing this year.

“Those commitments have been lauded and appreciated by NFUS and Scottish farmers in the past.”

Aldi was singled out for praise for being the only retailer to be selling exclusively Scottish and UK lamb over the Easter period.

NFUS also welcomed the commitment from the Co-op to move to 100% home-produced cross all its fresh meat later this year.

The fresh lamb offerings were surveyed at 45 supermarket stores across Scotland, revealing an overall 44% commitment to UK lamb from 2,803 packs of fresh lamb counted.