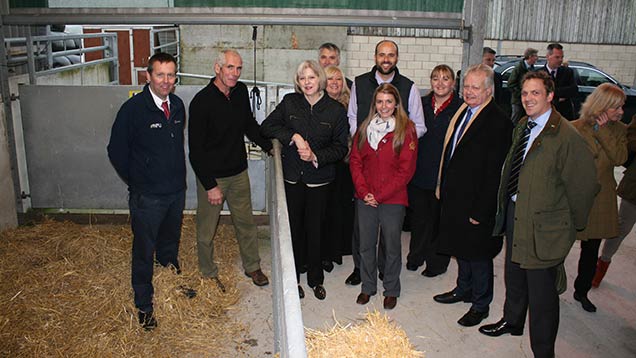 Theresa May with farmers from the farmer-led crime initiative.

Home secretary Theresa May has praised a farmer-led crime initiative that is fighting back against livestock and machinery theft in Lancashire.

Mrs May visited the county on Friday (21 November) to hear about the creation of a farmer support network launched by the NFU and Lancashire Constabulary.

She was given a tour of NFU Lancashire county chairman John Taylor’s Lots House Farm in Brookhouse, Lancaster.

The new alliance brings together farmers, auctioneers and the police in a bid to build a comprehensive picture of rural crime in the county.

Farmers add their names to a database and are asked to be the “eyes and ears” in their fields and report any crimes.

They also exchange information with each other on social media websites about crimes, including those where the odd piece of machinery is stolen, that often go unreported.

Police officers monitor the database for any criminal activities and use it to track down stolen machinery or livestock. The NFU says the farmer-support network could be rolled out nationally.

Under the initiative, members must:

Five auction markets operating in Lancashire and one just over the border in Cumbria are supporting the scheme. They have agreed to hold stolen livestock for up to 48 hours when the police do not feel they should move to their destination.

“What is great about the initiative I’ve heard about today is that local farmers are taking it upon themselves to educate police officers about the agricultural industry in order to help tackle rural crime.”
Theresa May

The scheme will provide a payment of 50p a head a day for sheep and £2 a head a day for cattle to cover the costs incurred by the auction or farmer. Rural insurer NFU Mutual is also funding this part of the scheme.

Meanwhile, the Food Standards Agency has agreed to provide support to the initiative and deliver intelligence back to the police through their work at abattoirs.

They are working in partnership with the police to target illegal abattoirs operating across the county, as these tend to be a route by which some stolen sheep are processed.

Mr Taylor said: “Prior to the network being set up, a police officer stopping a livestock wagon full of sheep would be more interested in the vehicle’s lights and brakes than the stock because it was more familiar ground.

“Now it’s different. If an officer suspects something fishy regarding livestock being moved, that officer has a set of questions to ask and if they are not satisfied with the answers, they can request for a farmer from the network to assist them.”

Mrs May said: “What is great about the initiative I’ve heard about today is that local farmers are taking it upon themselves to educate police officers about the agricultural industry in order to help tackle rural crime.”

The support network was set up in the summer following a string of livestock thefts in Lancashire.

NFU Mutual estimates more than 90,000 sheep, cattle and pigs could have been stolen in the UK during 2013 and that in total rustling could have cost UK farmers more than £6.5m.

In Lancashire, the cost of rural theft rose 38% to an estimated £1.8m, making it the fifth worst-hit county in the UK.