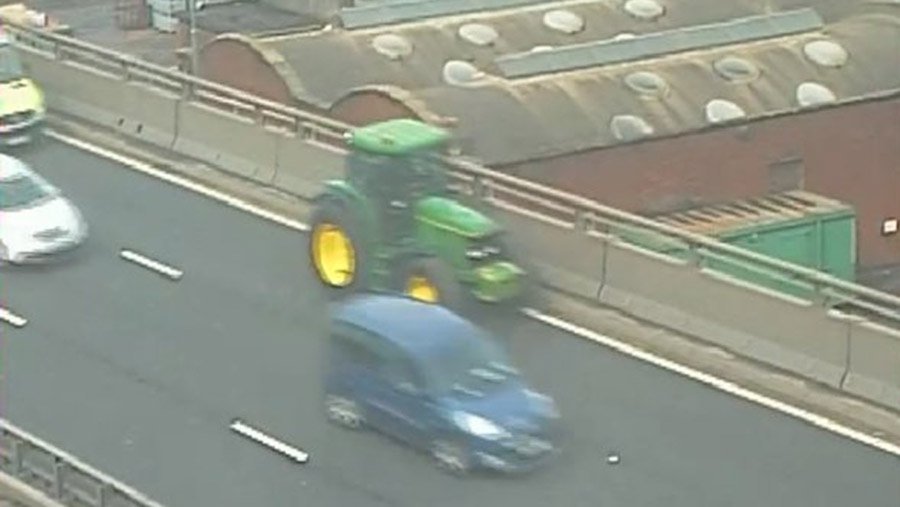 A patrol car operated by Transport Scotland spotted a John Deere tractor driving along the busy M8 motorway near Glasgow Airport on the Whitecart viaduct.

The Trunk Road Incident Support Service (Triss) vehicle, which monitors motorways and trunk roads, pulled the tractor over shortly before 5am on Saturday 2 April.

Traffic Scotland recorded the incident on camera and later posted a still of the tractor on its Twitter page @trafficscotland.

Tractor being escorted off #M8 Whitecart Viaduct.Cyclists and other slow-moving vehicles are also not allowed by law pic.twitter.com/Xwsd6mopsQ

Officers from Triss pulled the tractor on to the hard shoulder and gave the driver advice about the laws of the road. The driver was later escorted off the motorway.

By law, tractors, cyclists and other slow-moving vehicles are not allowed to travel on the motorway.

Rule 253 of the Highway Code sets out the laws around “slow-moving vehicles” and motorways.

It states: “Motorways must not be used by pedestrians, holders of provisional motorcycle or car licences, riders of motorcycles under 50cc, cyclists, horse riders, certain slow-moving vehicles and those carrying oversized loads (except by special permission), agricultural vehicles, and powered wheelchairs/powered mobility scooters.”

Paul Watters, head of roads policing at the AA, described the incident as “most unusual”.

“Tractors have got limitations in terms of braking and acceleration and they are often carrying equipment on them, such as buckets.

“They are not built for this sort of driving. The worst thing is the speed differential on motorways, which is always the factor that causes most damage to casualties in accidents.

“If you hit a tractor when driving at speed, you are going to end up in a bad state. Thankfully in this situation, an accident was averted.”

Mr Watters said tractor drivers caught driving on motorways could expect a fine of £100 and three penalty points on their licence. The option to attend a driver awareness course is offered an alternative to penalty points.

Tractor driver employers should also be aware that they too could face prosecution if death or serious injury were to occur in a tractor crash on a motorway, he added.

Fines of up to £450,000 can now be applied to companies with a turnover of up to £2m who are found to have breached the Health and Safety at Work Act 1974.