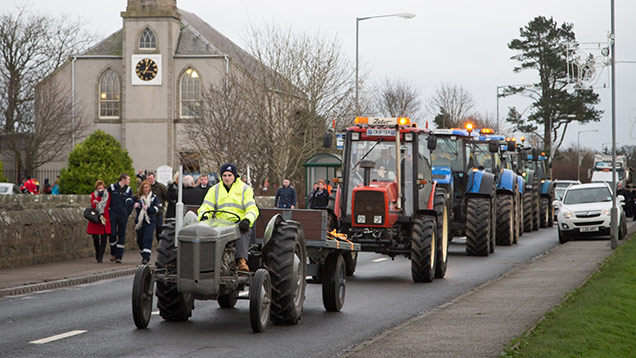 A rural community held a tractor procession to pay tribute to a young farmer killed in a road crash.

More than 200 mourners turned out to pay their last respects to William Sangster, 19, whose family said “lived for farming”.

Mr Sangster, from Auchnagatt, Aberdeenshire, died in a car crash near Mintlaw on Saturday 29 November.

He was killed instantly after a red Ford Fiesta he was a passenger in left the road and collided with a tree. Four other teenagers were injured in the crash, including his 17-year-old sister Nicole.

Mr Sangster was a well known in Crimond, Fraserburgh, Aberdeenshire, where he attended school and worked on local farms.

His family including his mother Tracey Marshall and her husband Paul Marshall, father Philip Sangster and his wife Sarah Sangster and sister Nicole, 17, and brother Lewis, six, released a statement paying tribute to him.

They said: “William attended Crimond School and Peterhead Academy before studying joinery at Banff and Buchan College but farming was in his blood. He much preferred to be outside working with his hands than being indoors.

“Latterly he was working at Blackhills Farm at St Fergus but he worked for many of the local farmers. He loved it, it was what he lived for.

“He was brought up in a farming environment and always adored tractors from a young age. He bought his own Grey Fergie tractor which had been his pride and joy.

“William came from a big extended family and he will be sorely missed by all who knew him. He was well-known as a larger than life character and always had a big smile on his face. He was very close to his sister, they did everything together.

“You would just always hear him laughing, he was popular with everyone, had lots of friends and was a devoted partner to his girlfriend.”