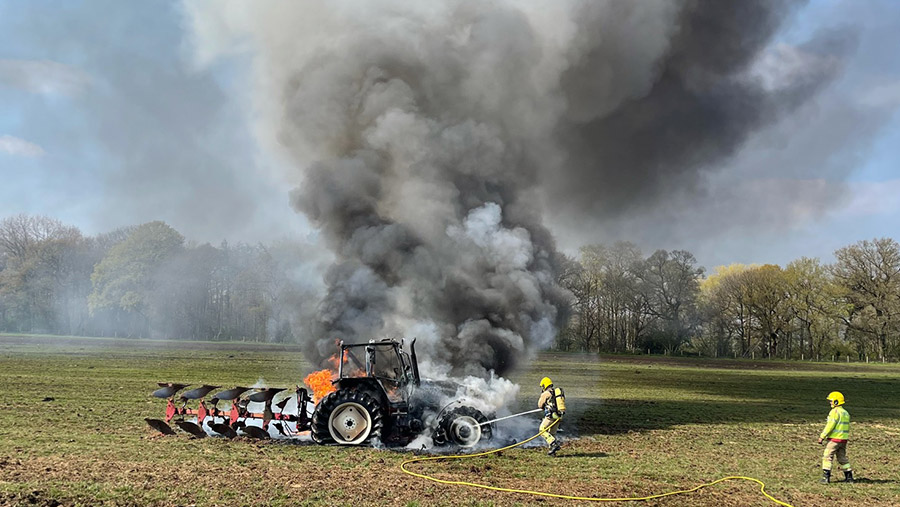 Dramatic images show the moment firefighters battled to extinguish a tractor fire in a field and the aftermath of a fire that torched a tractor and trailer out spraying crops.

The separate, unrelated incidents were part of a busy weekend for crews tackling farm fires.

Cheshire Fire and Rescue Service was called to a tractor fire in Neston on the afternoon of Saturday 17 April.

See also: How to protect your farm from fire risk and stay legal

A hydraulic hose burst on the tractor, which sprayed oil on to the engine, which then ignited.

Crews from Powey Lane and Ellesmere Port extinguished the fire in the field on Puddington Lane.

In Lancashire, three fire engines from Nelson and Colne extinguished a fire that torched 20 hay bales at a farm on Delves Lane, Burnley.

Firefighters arrived late afternoon on Saturday 17 April and were at the scene for nearly two hours.

In the afternoon on Friday 16 April, firefighters were called to a tractor fire on Colchester Road, West Mersea.

Essex County Fire and Rescue Service said about 2,000 litres of mixed solution containing chemicals to spray crops was spilled on the floor.

Firefighters worked with fire service scientific advisers and the Environment Agency for advice on cleaning the solution and the scene was left in the care of the farmer, who will excavate the land.

No one was hurt in either incident.

What to do if a fire starts

Call the fire and rescue service immediately and tell the operator: