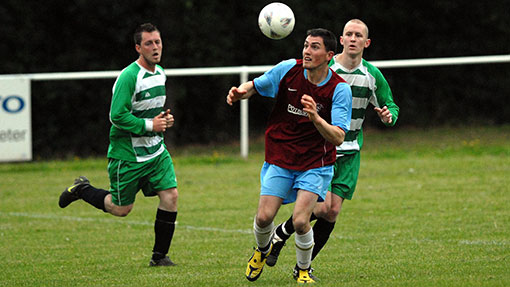 Tributes have been paid to an aspiring young farmer and footballer, who was tragically killed in a tractor crash.

Kevin Dorman, 25, died after the tractor he was driving ploughed through a hedge and overturned.

Police said the young Devon farmer suffered serious crush injuries after he was trapped between the tractor and a trailer.

It is understood that Mr Dorman, a farmworker for Clinton Devon Estates and Sidmouth Town Football Club player (pictured centre), had been cutting grass shortly before the accident.

Devon and Cornwall Police said the tractor and trailer appeared to have ploughed through a hedge and toppled over into the road in Pinn Lane, Sidmouth.

The heavy trailer, which was loaded with grass, crushed the tractor and trapped Mr Dorman inside the cab.

He was pronounced dead at the scene. His next-of-kin have been informed.

The tragedy happened at around 12.30pm on Monday (19 May) near Houghton Farm in Northmostown, near Sidmouth .

The death of Mr Dorman, a former Sidmouth College student, has shocked and devastated people who knew him.

“The whole Clinton Devon team, especially all Kevin’s colleagues on the farm, are absolutely devastated by what has happened,” said John Varley, estates director at Clinton Devon Estates.

“Kevin was an extremely hard working and well regarded team member. Our thoughts and deepest sympathy are with all Kevin’s family and friends at this dreadful time.”

“He would be up very early in the morning milking cows at 5am and often turning up to go to an away match at 12pm on Saturdays, playing the match in the afternoon and then having an evening meal before travelling back.

“It was a very long day for him. In terms of farmers being involved in active sport, it was not an easy road.”

Mr Dorman, a lively forward and prolific goalscorer for the first and second team, had not played for Sidmouth Town this season after suffering a back injury.

But he was expected to return to the team in September and start playing again in the coming season.

“He was a free-scoring forward with a very powerful shot and he had a real competitiveness and will to win.”

Despite being out through injury this season, Mr Dorman remained loyal to the club and regularly turned up to support his teammates and attended club activities.

“Everyone has taken his death very hard. People were very saddened, the shock is palpable around the club,” added Mr Argyle.

Sidmouth Town FC will hold a minute’s silence in respect for Mr Dorman at its annual club presentation this Friday (23 May).

Mr Argyle said the club would consider options for a lasting tribute in his memory.

A full crash investigation involving police and the Health and Safety Executive (HSE) is under way. Police have appealed for witnesses to contact them on the 101 number.