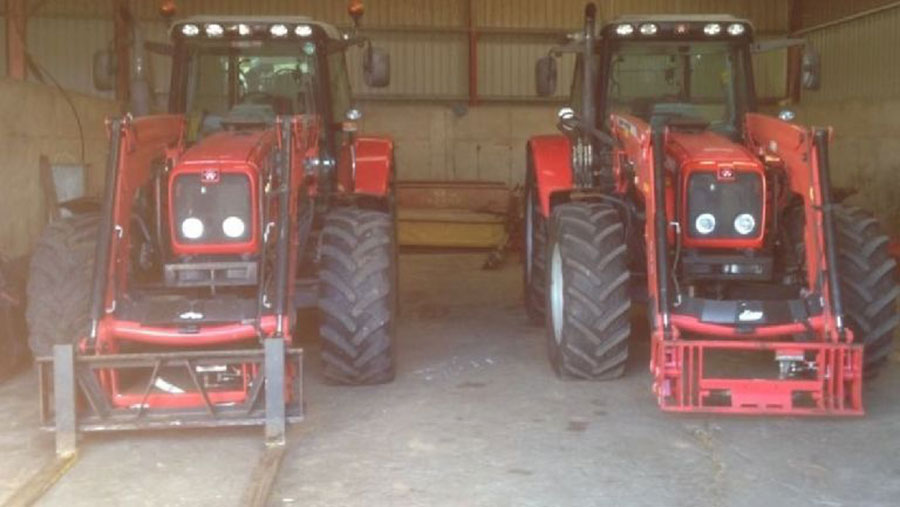 Two red Massey Ferguson tractors worth about £70,000 in total have been stolen from a farm in West Lothian.

Police Scotland is appealing for witnesses following the high-value theft of agricultural equipment in West Calder.

The incident happened sometime between 9pm on Monday 22 May and 7am on Tuesday 23 May at Longford Farm.

Thieves entered a shed on the farm and stole two Massey Ferguson tractors. The first is a red 5470 model with registration number SF57 HJZ and chassis number S074034. It was fitted with pallet forks.

The second is a red 6460 model with registration number KO06 SDY and chassis number R200008. It was fitted with a red Kverneland topper at the rear.

PC Louise McReight, investigating, said: “The value of the stolen tractors is about £70,000 and we are pursuing a number of lines of inquiry to trace the vehicles and identify those responsible for their theft.

“Stealing two tractors would require a large truck and so anyone who remembers seeing such a vehicle around Longford Farm on Monday evening or Tuesday morning, or who witnessed any other suspicious activity in the area, should contact police immediately.”

Anyone with information is urged to contact Police Scotland on 101 and quote incident number 1159 of 23 May, or Crimestoppers anonymously on 0800 555 111

Police in north Somerset are investigating the theft of four balers from farm buildings in Hewish.

The equipment, which is used to compress crops into bales, is worth an estimated £2,000.

Avon and Somerset Constabulary officer Katy Drabble, investigating, said: “We’d really like to prevent any more farmers being targeted, so please secure baler equipment where possible – particularly access to the knotter part of the machinery.

“We can offer a free marking system and also advise on security measures landowners can take.