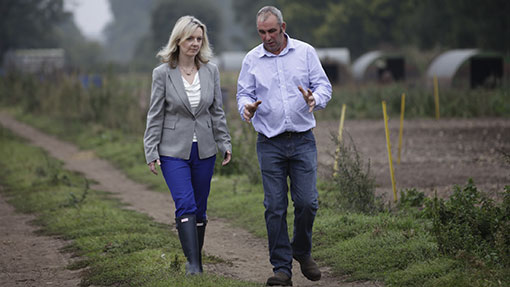 British food is better for the environment and local economies – as well as being better for farming, Defra secretary Liz Truss has said.

Ms Truss underlined the importance of British food during a farm visit in her south-west Norfolk constituency. Her comments came ahead of British Food Fortnight – the annual celebration of British food and farming, which this year runs from 20 September to 5 October.

“One of my priorities as secretary of state is to get us eating more local food and also to make sure we have high-quality products that we can export,” Ms Truss told Farmers Weekly. Buying local food supported local tourism and the landscape as well as farming, she added.

Ms Truss was speaking at a “Walk the Pork” event hosted by local pig farmers Rob and Sarah Simonds of Scotts Field Pork at Oxborough, near Swaffham. The annual event brings together local farmers, chefs and other food businesses to discuss new ideas and marketing strategies.

Scotts Field Pork is a rare-breed herd of 60 Large Black sows. Run commercially, the business supplies a local network of high street butchers. The aim is to produce traditional pork with good texture and flavour without being overly fat, said Mr Simonds.

Consumers are increasingly interested in where their food comes – and keen to support local farmers and food producers, suggests a recent study. The local food network is worth £52m and supports almost 1,400 jobs around Norwich alone (see panel).

Mr Simonds said: “The idea of Walk the Pork is to get people on the farm so they can meet face to face and actually see where their pork comes from. At the same time, we can explain what we do – and give people the opportunity to taste the food we produce.”

The farm had a good story to tell consumers, said Mr Simonds. It was a small business using family labour to ensure a future for a rare breed. “There is a huge opportunity to give the customer a pork product that tastes better than perhaps what they are used to,” he explained.

Local meat wholesaler and butcher Charlie Mills of Bramfield Meats said: “Early impressions among our customers were slow – but once we got them to try Large Black pork they’ve been coming back for more. We’ve now got regular customers that swear by it.”

Farm leaders believe the government should do more to help the industry promote British food and farming. The NFU has calculated that the UK is only 60% self-sufficient in food that could be grown here – a fall of more than 15% since 1991.

The union has called for an agricultural growth plan that would encourage farmers to produce more food. It says a growth plan would help to set a framework to support increased production and arrest the decline in self-sufficiency.

NFU president Meurig Raymond said: “What we need now is for farming to be at the heart of decision-making across the wider food industry and government – to allow for more food to be both produced and consumed in the UK.”

This year’s British Food Fortnight has the theme Bring Home the Harvest. It aims to rekindle interest in celebrating the harvest in homes, schools, churches, hospitals, restaurants and pubs across the country. The fortnight follows Red Tractor Week, which runs from 15-21 September.

Local farms are helping to support almost 1,400 jobs in and around Norwich – which is one of Britain’s fastest growing cities.

The local food market around the city supports some 1,390 local jobs in farming, food production and retailing, says the study by the Campaign to Protect Rural England. Annual turnover from the local food network is worth £52m, says the Field to Fork report.

Norwich has a population of 195,000. It is Britain’s fourth-fastest growing city, according to Norwich City Council’s corporate plan. The local food network supports many jobs, but its growth is hampered by limited resources, the study suggests.

Norfolk CPRE chairman James Parry said the organisation had done a lot of work to quantify the contribution made by local food suppliers to the local economy. Farming had to be economically viable if it was to work in harmony with the local landscape, he told Farmers Weekly.

“Specialist food suppliers have a key role to play in that,” said Mr Parry. “The study is evidence that the local food network around Norwich is a major economic player, probably turning over about £52m a year.”

But specialist food suppliers faced problems too, said Mr Parry. The CPRE hoped to do more to support local producers, he added. “They are often very small and cannot always afford large marketing budgets. Promotion and publicity are often a problem.”