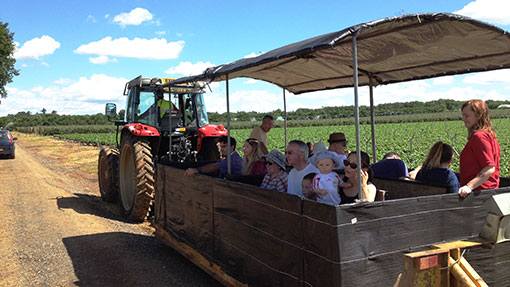 The owners of Tuesley Farm, one of the largest fruit farms in southern England, opened their doors to the public on Sunday (8 June) for the annual Open Farm Sunday event.

Host farmer Harry Hall, said the 190ha farm, part of the Hall Hunter Partnership, had taken part in Open Farm Sunday almost every year since it started in 2006.

Farm minister George Eustice and LEAF chief executive Caroline Drummond were among dozens of visitors who were given a tour of the farm, near Godalming, Surrey.

Mr Eustice said: “Open Farm Sunday is a great opportunity for people to learn more about where there food comes from, and to demonstrate to young people why a career in agriculture can be so rewarding.”

Take any pictures on Open Farm Sunday? Farmers Weekly will be featuring a round-up of photos in next week’s magazine. Please email yours – with a few lines about who is in them and where they were taken – to fwipictures@rbi.co.uk by 12pm on Tuesday 10 June.