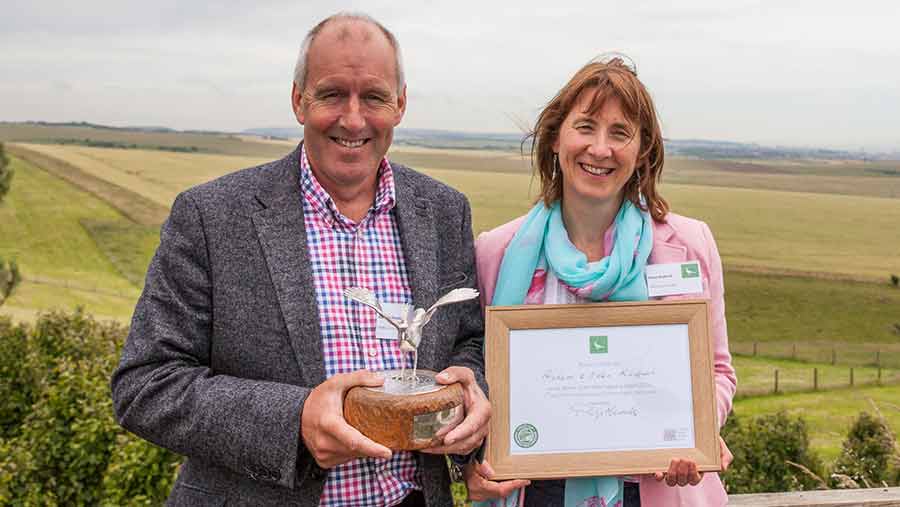 Brecon-based livestock farmers Richard and Helen Roderick have been named winners of this year’s Silver Lapwing Award, granted each year by the Farming and Wildlife Advisory Group (FWAG) to recognise commitment to species and habitat conservation.

Introducing the winners at a ceremony in West Sussex on Thursday (7 July), judge Martin Hole said that the Rodericks had created a veritable “Eden” on their Welsh hillside and complimented the couple’s energy and drive in protecting and enhancing the landscape and its history.

Newtown Farm, which overlooks the Usk Valley in the Brecon Beacons National Park, covers about 260ha, with 75 suckler cows, over 1,000 ewes and 260 ewe lambs, plus 20ha of low-input cereals.

Across the farm, Mr Roderick has restored a patchwork of small fields, by planting new hedgerows protected by double-fencing. He has also fenced off his streams, allowing wildlife to move about the farm freely while improving the ecological health of the river.

There is also an iron-age hill fort above the farm where Mr Roderick has cleared bracken and scrub, and runs a small herd of Highland cattle to maintain the cleared ground.

In particular, he praised the “beautifully managed and recreated hedgerows”, which enabled the Rodericks to run grassland management plans in harmony with the landscape.

Mr Roderick said he was receiving the award “on behalf of the many family farms in Wales who farm in a very similar way to us”.

Runner-up in the competition was Dominic Gardner, who combines sheep and arable production with conservation and habitat creation on 3,000ha of downland in the South Downs National Park.

Brexit and the environment

Environmental management is going to move up the government agenda following the recent Brexit decision, as Defra starts to create a new domestic agricultural policy, according to Philip Merricks, MBE, who was guest of honour at the awards.

“It is no good thinking that an incoming government in a post Brexit situation will carry on supporting farmers in the way it has done with Pillar 1,” he told the award ceremony.

“It is blatantly clear that Pillar 2 payments – agri-environment and nature conservation – will be the way forward. That is the message that I’m sure all FWAG advisers will put across.”