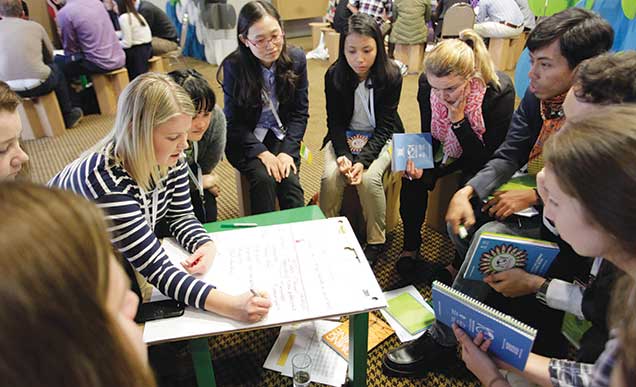 Young farm leaders from around the world have issued a declaration calling for action to help solve the pressing issues facing modern agriculture and food security.

The declaration was written at the 2015 Youth Ag-Summit in Canberra, Australia, on 28 August, when more than 100 18- to 25-year-olds from 33 countries discussed the role of science and agriculture in feeding the planet.

The Canberra Youth Ag Declaration outlines solutions and actions proposed at the meeting and will be presented to the United Nation’s Committee of World Food Security in Rome in October.

Each of the five themes chosen has been underpinned with solutions and actions. These include:

The basis of the declaration came from the five themes (see right) voted by delegates as the ones where they believed young people could have the greatest effect on influencing change in the short to medium term.

The summit was organised by Bayer CropScience and Future Farmers Network Australia (FFNA).
Georgie Aley, FFNA chair, said: “To drive real outcomes from the 2015 Youth Ag-Summit, we need to ensure the solutions and actions identified are communicated with global policy and decision-makers.

“The opportunity to present the declaration to the United Nations – to say this is what young people across the world think needs to be done to feed a hungry planet – provides a significant step towards enacting change.”

In addition to developing the declaration, delegates were challenged to shape three things which set goals to make a difference in their home countries.

British delegate Oliver Cassels, 23, from London, said he gained a huge amount of hope and positivity. “The amount of innovative ideas and passion in the room made me think that finding a solution is definitely possible.”