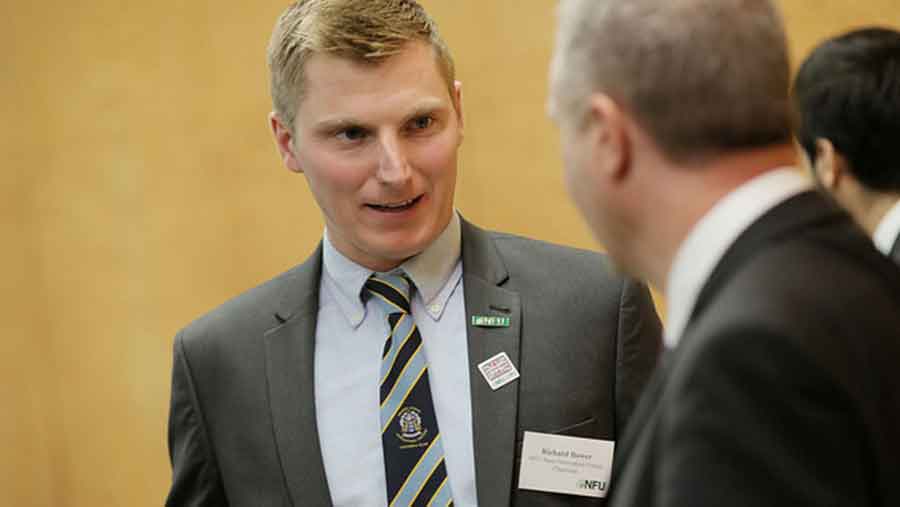 Staffordshire young farmer Richard Bower has launched a bid to become NFU vice-president – a move it is believed would make him the union’s youngest ever officeholder.

He has been nominated to contest the post of NFU vice-president in the union’s leadership elections, due to take place on 21 February.

Mr Bower said: “I don’t want to play the young farmer card – this is not about me. It is about the next generation helping to shape the future and creating a dynamic officeholder team.”

Brexit means it is more important than ever that the union is forward-looking, added Mr Bower, who said he would be standing on a five-point plan.

The plan would encompass issues including leadership, agri-technology, changing consumer tastes, the importance of British food and educating the public about farming.

“The NFU is a fantastic organisation and we have a real opportunity to drive the industry forward – we will no longer be part of the CAP and we have the chance to forge a new direction.”

A Harper Adams graduate, Mr Bower returned to the family farm in 2011.

He has since helped grow the farm business to generate income from tourism, renewable energy and embrace conservation agriculture.

Mr Bower has chaired the NFU Next Generation board for the past four years – including a meeting with Defra secretary Michael Gove last autumn.

It is important that Mr Gove recognises the importance of British agriculture and its role in providing good-quality food while looking after the environment, he said.

As well as his NFU Next Generation work, Mr Bower also collaborates with the National Federation of Young Farmers’ Clubs AGRI steering group.

Electing a younger vice-president would help show that the NFU is fit for the future – and ahead of the curve, he said.

The youngest NFU vice-president to date was Shropshire farmer Richard Watson Jones, who was seen as a leading light for the union when he was elected in 2000.

Mr Watson Jones’s role as vice-president was cut tragically short when he passed away suddenly at the age of 37 while on holiday in Portugal in July that same year.

They will be followed by hustings at Skelmersdale, Lancashire and Scotch Corner, Darlington (Wednesday 24 January); Oakham, Rutland and Newmarket, Suffolk (Thursday, 25 January).