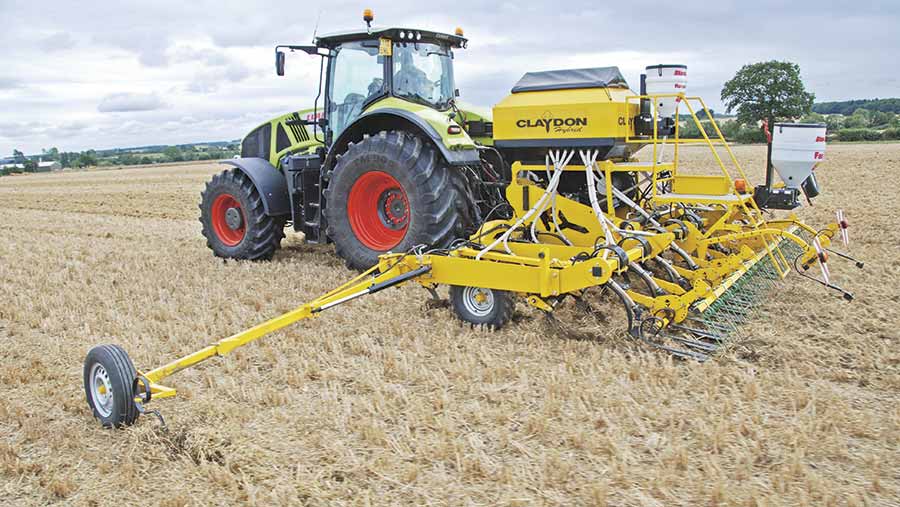 Establishment is the most important stage of growing profitable cereal crops because getting it wrong can reduce yields before the growing season has even started.

However, as financial pressures continue to mount, farmers are having to reduce outgoings to make the crop viable.

Establishment is one key area where substantial savings can be made, such as switching to less intensive cultivation systems.

So, how can you strike the right balance and cut establishment costs without compromising on yield? Farmers Weekly asks three farmers who have achieved this.

Farming 202ha of his own land and 600ha contracted near York, David Blacker has cut his farm outlay by £50,000 a year – largely on the back of reducing establishment costs.

“I’ve looked at reducing cultivations for years,” he explains. “I used to plough 50% to crush clods on our heavy land and use minimum tillage on the other 50% – but establishment costs were huge.”

“Initially, I considered direct drilling but I had major concerns about yields dropping in the first few years so dismissed it immediately,” he says.

“We settled on strip tillage as this seemed to tick all the boxes. There haven’t been any yield penalties and we’re now operating a one-pass system.”

Cereals are established directly into stubble using a Mzuri Pro-Til drill, and Mr Blacker was concerned about weed control and the effectiveness of pre-emergence sprays.

“I worried because only a very small amount of the active ingredient was hitting the soil,” he explains. “However, the lack of movement between strips seems to be keeping weed seeds dormant.”

Slugs became a problem and in the third year – partnered with abnormally high slug pressure – the farm lost about 30% of its wheat crop. However, Mr Blacker was able combat this using a Mzuri stubble rake.

“I was very sceptical about how useful it would be. But, when set up correctly it really does work and has helped ease slug pressures.”

One of the biggest financial benefits of strip tilling is the reduced pressure on cashflow, explains Mr Blacker. “Previously, I was having to sell wheat to cover input costs.”

The farm is now using about 38,000 litres less diesel a year and has significantly cut its labour bill. “I now don’t have to employ additional part-time staff,” says Mr Blacker. “This equates to a £12,000 saving each year.”

Machinery costs have also been lowered, reducing the hours on existing tractors and eliminating the need to hire any additional equipment.

“Compaction has reduced considerably. Crops are looking much healthier and the soil has restructured itself – I haven’t ploughed for five years now.”

“For anyone thinking about changing their system, have confidence and don’t be discouraged by thinking land isn’t suitable,” says Mr Blacker.

“Talk to other people who have done similar things and look at every machine on the market.”

Rob Addicott began looking into non-inversion tillage 15 years ago, when the farm was dairy with arable on the side. “We used to operate a traditional plough-based system due to the grass leys.”

“We go in with shallow cultivations after harvest to germinate weed seeds,” he explains. “Drilling is then done directly into this – rolling if need be.”

The farm has made huge savings with this approach. “We have saved a third on our establishment costs,” explains Mr Addicott. “Overall, we will save about 600 tractor and man hours a year.”

Though he had initial concerns over yield, this hasn’t been an issue. “If you keep on top of weed control there shouldn’t be any problems. So far, we’ve seen no yield penalties.”

Mr Addicott did have a problem with volunteers in following cereals, but has alleviated this through careful monitoring and adjusting the rotation.

“There is a lot more spring crop in our rotation now,” he explains. “One solution is to include grass in the rotation. This is difficult for those operating a purely arable system, but it can be hugely beneficial.”

Traditional ploughing does still have its uses, he adds. “There has to be a holistic approach to establishment and management. Where weed pressures are particularly bad, it is better to bury the seed. For us, it works to have the whole range of equipment.”

There are also other benefits to reduced tillage, says Mr Addicott. “Soil health is a crucial element of establishing a good crop. It takes weeks and months to rebuild structure – minimising tillage gives crops a punchy start.”

Lack of profitability triggered a transition into reduced tillage three years ago at Sentry Farms, Dorset.

“On the abrasive flint soils of Dorset, rubber and metal costs are hugely painful,” explains manager Richard Peck. “The farm simply could not sustain the costs of a conventional ploughing system, so we began to look into alternatives.”

The farm previously used a Simba SL for primary cultivation, followed by a levelling cultivator, drill and roller – now a Claydon drills straight into stubble.

“We only do prior cultivation where there is a grassweed problem,” explains Mr Peck. “Using a Simba CultiPress, we cultivate at a very shallow depth just to get a chit and then spray off and drill immediately.”

This system is estimated to save between £74 and £86/ha as well as reducing labour and machinery pressures. However, it’s important not to overlook the potential of a plough, says Mr Peck.

“There is still a place for a plough and combi drill,” he explains. “It’s important to take into account the cropping and the effect of the weather on the land.”

Compromised yields haven’t been an issue, though good management is crucial, says Mr Peck. “Slug pellets are an essential part of making this system work.

“There is a lot more trash on the surface so we apply pellets as we drill, after learning the hard way in our first year, when slug damage was acute – especially after oilseed rape.”

“This type of system is not for everyone and you have to work with it – it doesn’t just happen,” he adds.

“Do your research, look at farms that are like yours and be hot on management – you will make significant savings.”