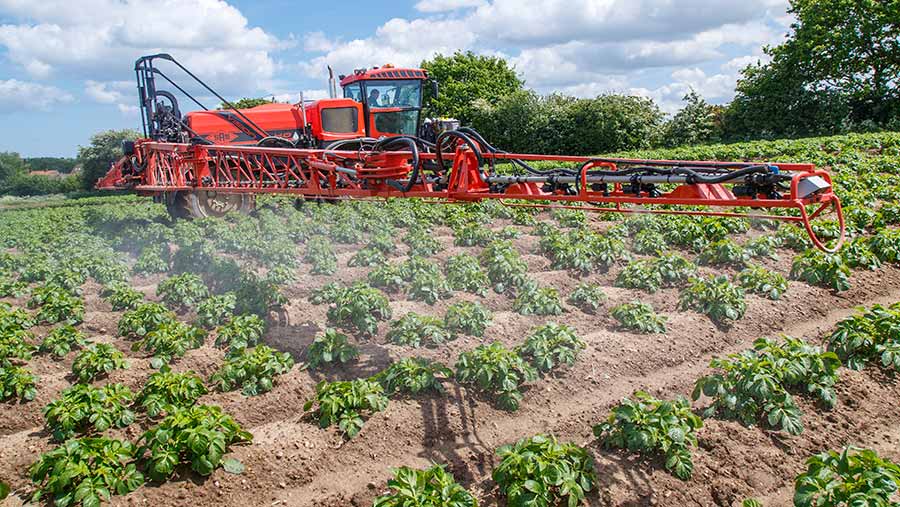 Potato farmers will have to rethink their blight programmes this season after the dramatic increase in a new strain of blight last year that is resistant to a key fungicide.

The strain has spread quickly after first being reported in the Netherland in 2013, and has been found across the country in Kent, North Yorkshire, West Midlands and Suffolk, but hasn’t yet been detected in Scotland or the South West.

Blight 37_A2 has proved insensitive to fluazinam, the popular active often used at the start of blight programmes, and more often than not the active of choice used in combination with desiccation sprays.

With fluazinam out of the picture, growers will have to look to existing alternatives and new actives, particularly for late-season control this year.

Here three agronomists give their thoughts on fungicide strategies for the season ahead.

Over the last two years blight scouts in England have been sending samples to Fera Science (formerly the Food and Environment Research Agency) and the James Hutton Institute for genotyping as part of the AHDB Potatoes Fight Against Blight campaign.

So what, you might ask. Well, it turns out that 37_A2 is insensitive to fluazinam. This was brought home to me in no uncertain terms when I visited the Eurofins blight trial site in Derbyshire in the autumn of 2017.

As a regular visitor I have been used to seeing the untreated control plots almost dead, with all the other treatments having varying degrees of infection but generally holding their own.

Not so in 2017 – the fluazinam plots were just like the control plots. What made it even more scary was the fact that the trial site was inoculated with Blue 13_A2 and Pink 6_A1, the two most common genotypes over the last 10 years, yet at the end of the season 37_A2 was prevalent.

Traditionally I would start and finish my spray programmes with fluazinam, the theory being that getting some soil coverage as well as some foliage coverage will protect against zoospore infection and it’s cheap.

At the end of the programme fluazinam will give cheap tuber blight control and an ideal mixer with diquat, and some labels allow for a zero-harvest interval too.

Without fluazinam, what do we have left to give us tuber blight control? I am looking at the following three products: cyazofamid (Ranman Top), amisulbrom (Shinkon/Gachinko) and fluopicolide + propamocarb (Infinito), nowhere near as cheap as fluazinam, but effective.

However, nothing is ever straightforward – Ranman Top and Shinkon/Gachinko are from the same resistance group, so we are limited to the number of applications, and they are single actives, so ideally should be mixed with a different product to avoid resistance.

Infinito is an alternative but isn’t allowed under certain crop production protocols.

My plan this year is to start with a mancozeb + cymoxanil mix (Curzate), followed by a couple of applications, in the rapid-growth stage, of benthiavalicarb + mancozeb + adjuvant (Valbon and Zinzan).

I will then seriously look at the latest new chemistry in the form of Zorvec Enicade to get me through to stable canopy.

From there on in I will mix and match products according to weather conditions, variety and market (off field or storage), while also considering cost.

There’s been plenty to ponder on at the series of winter meetings this year.

New products in the potato portfolio after years of little change and significant changes in the main disease of blight that growers have to deal with every season.

The latest results from samples taken by blight scouts have shown a significant shift in the UK population, with 37_A2 jumping to account for 24% of the total blight.

The situation in Scotland is trickier, with no 37_A2 found to date, but that’s not to say it’s not out there.

With prevailing south-westerly winds, it’s probably only a matter of time before it’s detected.

To help us understand the changing population, growers and agronomists can sign up as blight scouts and submit samples from any infections they find.

The shift in populations, coupled with the resistance issue and arrival of new chemistry, is leading us to have a major rethink on blight programmes.

For seed growers some of the decisions are straightforward. Fluazinam is used under an extension of authorisation for minor use to help reduce powdery scab. When applied at planting it can’t then be used in the blight programme.

Where it hasn’t been used in this situation the options are more complex. Used on its own, fluazinam will be inviting trouble further down the line, so it may see limited use in programmes along with good blight chemistry to utilise its effects on sclerotinia.

The new chemistry this season is Zorvec from DuPont. This is a new active ingredient and mode of action, and it will have an important role to play in blight programmes, especially in the rapid-growth phase.

It will come in a pack with a partner product that will limit its use, as all partners have a seven-day interval recommendation while for Zorvec it is 10.

It’s important that we don’t break the chemistry by over-extending intervals and applying in blocks.

Programmes will be based around an early start at the rosette stage and alternating products throughout the season with the appropriate chemistry for the growth stage. 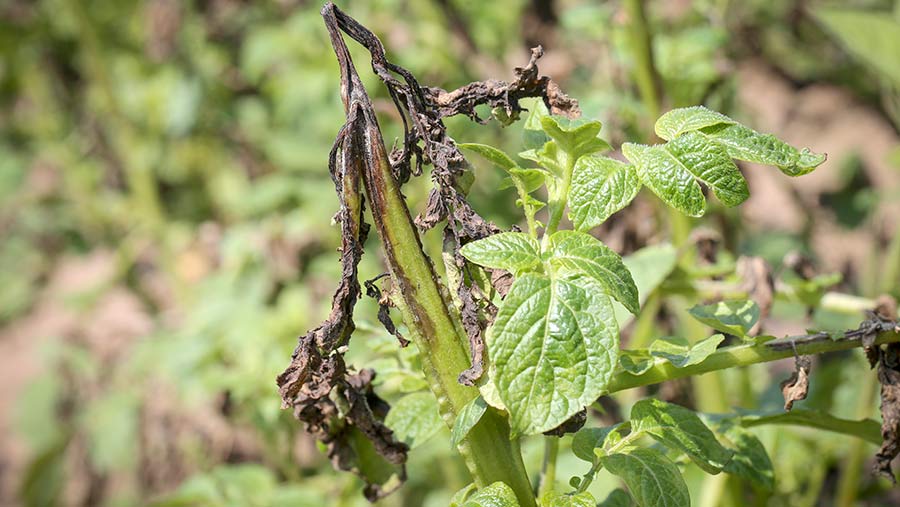 There’s an old saying: we do this year what we should have done last year. The 2017 season seemed like it was an easy one, but ended with a sting in the tail as growers found higher-than-expected levels of tuber blight in crops where no blight had been seen.

Along with the Fluazinam-resistant (EU-37) blight strain, another new strain (36) was detected in UK blight samples last year, so we will need to watch this space.

For 2018 we have one more risk factor that may be higher than usual, tuber blight in seed and volunteers, and there is also the threat of oospore infection.

This soil borne infection is possible where volunteers were not controlled well last autumn, became infected with blight, and the resting spores of the disease remain in the soil.

For blighted tubers, there is a bright side, as a very low percentage of blighted tubers will ultimately produce a blight-infected plant – but you only need one in the wrong place.

Our blight plans for 2018 will be different to previous years because we have a new fungicide, Zorvec Enicade, and this is a major step forward in disease control.

This product is extremely mobile in the plant and fits perfectly into the rapid-growth phase, giving excellent protection for seven to 10 days.

See also: Blight fungicide will be ‘most effective’ on the market

Our programmes will consist of many of the same things we used last year, but Zorvec is likely to feature around the third, fourth or fifth sprays.

We usually start with Cymoxanil + Mancozeb and alternate with other products, depending on risk. The second spray is likely to be Ranman or Revus.

After the initial rapid-growth phase where Zorvec fits the bill, all varieties except strongly determinate types will continue to produce new growth and regular sprays are needed to keep the cover on.

Product choice will reflect risk, which is based on the weather and on reported outbreaks, but we always build in tuber blight control regularly from tuber initiation onwards.

We also use Mancozeb in mix, usually in alternate sprays – it is a good part of the anti-resistance strategy. Another very good product for high-risk situations is Infinito with its good foliar and tuber blight activity.

For desiccation we would hope to use Amisulbrom in mix with the first spray, and Ranman with the next. As a general principle, tuber blight active fungicides should be used until no green material remains; this is usually the first two sprays, but regrowth can cause major issues with tuber blight if left uncontrolled.

We will be paying a lot of attention to green tops in wet areas down tramlines. These are very hard to burn off, so are likely to get flailed down as they cannot be allowed to survive the haulm destruction.