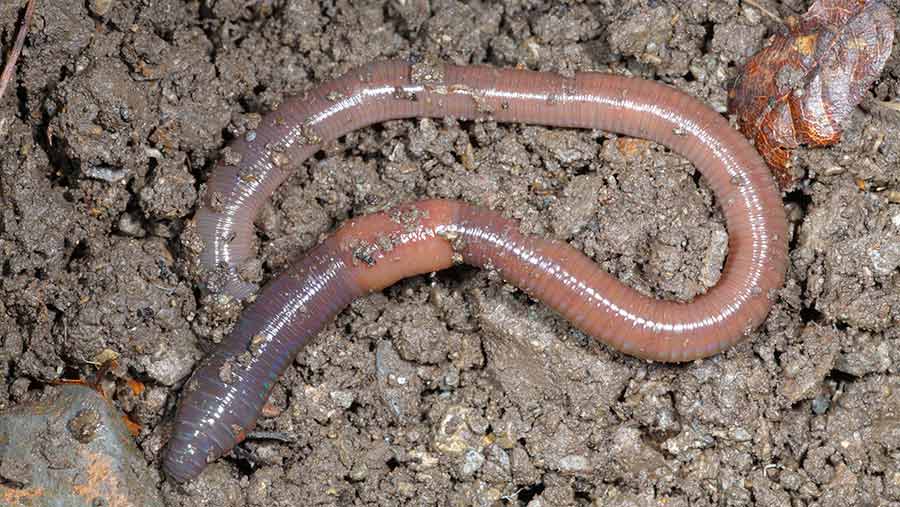 Having a healthy population of earthworms can help growers halt the UK’s serious decline in soil health, with an estimated loss of 2.2m tonnes of topsoil each year.

Earthworms’ key role is to process organic matter into new soil and cycle deep soil to the surface, and they spend 74-91% of their time on these activities, says Lucy Crockford, a lecturer in soil and water management at Harper Adams University.

See also: Tips on how to get your soils back in to better shape

100 individuals of epigeic surface dwelling species of earthworm eject 840kg/ha a year of surface litter. Therefore, they are crucial to reversing the decline in soil health.

Epigeic worms can process organic matter, such as compost and farmyard manure, into a usable form for microbes, thereby improving nutrient cycling and cutting fertiliser costs.

10-30% of nitrogen uptake by plants is in a form of the nutrient produced by earthworms. Similarly, 50% of phosphate uptake in grassland is in earthworm-produced compounds.

While the epigeic species – one of three species groups found in UK soils – are involved in the breakdown of materials, a second type, the vertically burrowing anecic species, move soil from their deep burrows to the surface, naturally working the soil.

The third type of worm, endogeic, processes organic matter found in the soil such as roots and create horizontal burrows.

How to measure worm numbers

The first step to ensuring you have a healthy earthworm population is to count them. There are three simple ways to do this.

1. Add a few heaped teaspoons of powdered mustard to 1.5 litres of water. Mark out 1 sq m of soil and pour on the solution.

After five minutes the earthworms should rise to the surface in an effort to escape the pungent aroma.

This method is useful for counting deep burrowing earthworms, but is unlikely to reveal surface dwelling worms.

This method allows the three varieties to easily be split into their groups and also allows them to be weighed. Only weigh adult worms.

3. Look for worms on the surface. Epigeic worms will be found in leaf litter or underneath rocks as they are surface dwelling.

This method will not provide comparable data, but it will give an indication of numbers.

A good mix of the three different types of worm is key as each perform different functions, and a high proportion of small worms would indicate that they are being killed before reaching maturity, potentially due to tilling.

Adult worms are identifiable by their larger size, and also the presence of the clitellum, a noticeable thicker ringed section near the head of the worm.

So how do growers raise numbers? The key thing is to promote a cool and damp soil which is not disturbed very often.

This can be achieved by reducing cultivations and providing organic matter to the soil. Studies have shown that when the amount of crop residue left is doubled, the number of worms increased two-and-a-half times.

This is especially important in a very hot summer to help insulate the soil from the drying conditions.

How to identify between the three worm groups