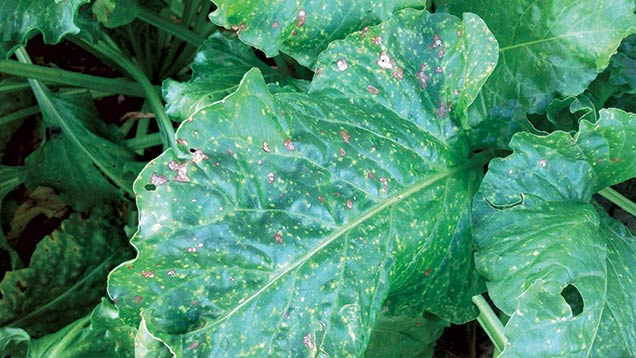 A little-known disease appeared in British sugar beet crops for the first time last year and growers will need to be on red alert during the new campaign. Adam Clarke finds out all you need to know about stemphylium.

Stemphylium is a group of diseases, of which different members can affect various species of plant. The species within the pathogen group infecting sugar beet crops is relatively new and was first observed in the Netherlands in 2007.

It has now made its way to the UK on the wind, and two cases were discovered in British crops last year – one in Suffolk and one in Norfolk.

What other hosts does it have?

The species affecting sugar beet has not yet been clearly determined by scientists, although laboratory studies in the Netherlands suggest alternative hosts include potato, fat hen, white mustard and spinach.

Knowing the complete host range will help growers to formulate an integrated strategy for controlling the disease if it becomes established in the UK.

How much of a threat is it in the UK?

The first case of stemphylium was reported in the Netherlands in 2007 and is now widespread across the country.

If it were to spread at the same rate across the UK sugar beet area, it could be a major problem by 2020.

It is easily mistaken for nutrient deficiency, so knowing how to identify it and keeping an eye out for the disease is important.

The early sign of the disease is irregular yellow spots about 0.5-2mm wide, usually appearing between July and August. The leaf tissue dies from the centre of the spot outwards, resulting in larger brown lesions 1-3cm across.

Heavy infection results in leaves dying off and the disease spreading to new growth as it emerges.

Stemphylium often begins as a small patch in the field and spreads across the field, opening up the canopy and exposing the ground – favouring weed growth and reducing frost protection later in the season.

What is the potential damage to the crop?

In field trials in the Netherlands, stemphylium infection has caused sugar yield losses of between 22% and 42%.

How is stemphylium controlled?

The fungicides currently approved for use in UK sugar beet crops offer little or no control against the disease, so if it were to spread quickly, chemical control would be difficult.

There are indications that fungicides approved for use in potatoes have activity on stemphylium in Dutch trials, and the British Beet Research Organisation (BBRO) is monitoring the ongoing work by the Dutch-based Institute of Sugar Beet Research (IRS) for the latest developments to update British growers.

The situation with stemphylium is very much a watching brief. We are concerned, but not overly so, and I would urge growers and agronomists to keep an eye out for the disease, particularly in Norfolk and Suffolk, where it appeared for the first time last year.

If you find any signs of the disease, contact your area manager or the BBRO and we will test any samples and confirm if it is stemphylium.

If the disease is confirmed, we only have epoxiconazole-containing products such as Opera (epoxiconazole + pyraclostrobin) that have any activity on the disease.

If cases appear during the 2015-16 campaign, we will be conducting ad-hoc fungicide trials to get an idea of what may work in the UK.

We may make an application for an off-label approval of a fungicide product to control stemphylium if required, based on Dutch experience and any UK data we can gather. We will look at all options to protect the crop.