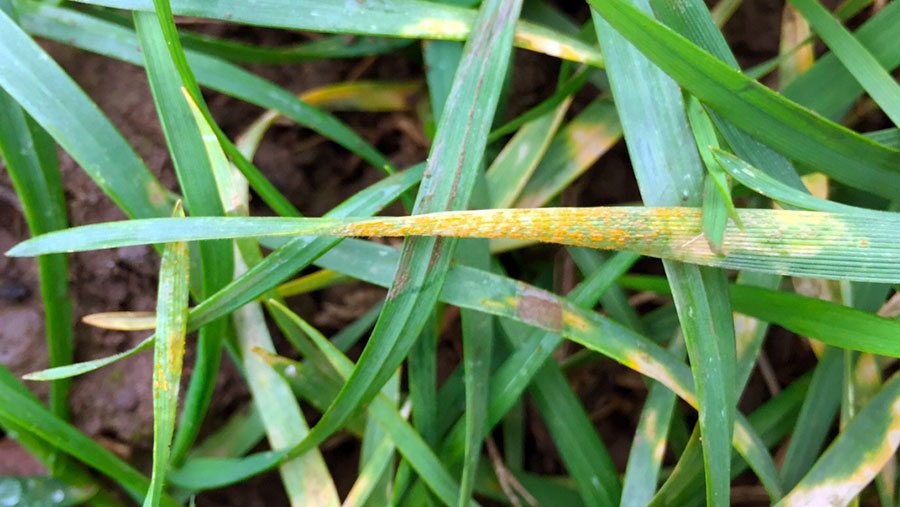 Disease pressure in cereals and oilseed rape is starting to build as conditions take a turn for the cool and wet towards the end of this week.

With early spring fungicide sprays still a little way off, growers and agronomists from Lincolnshire to Kent and Sussex are reporting that septoria, the number one disease in wheat, is beginning to bubble up on lower leaves.

The odd instances of mildew and yellow rust are also being flagged as far north as Angus in Scotland, but growers are hoping that colder weather will return to damp down these diseases.

Both of the key oilseed rape diseases phoma and light leaf spot are showing up in crops now, too.

Here are nine disease-related tweets to give a general flavour of what’s happening out in the fields right now.

Signs of septoria on the lower leaves of some wheat crops. Bare this in mind when planning the earlier fungicide timings #cropprotection pic.twitter.com/RihyawxgRK

A wet grey day in Hampshire at the @Bayer4CropsUK demo site. Unfortunately the septoria is loving it. Plenty of inoculam on this Crusoe. pic.twitter.com/ob75s8hIbM

The mildew is dying back in the cold & wet, but the septoria pressure will be significant when it warms up & the disease takes off.

Frost may keep the yellow rust at bay, but there's no shortage of Septoria in our September sown Santiago and Consort plots in Herefordshire pic.twitter.com/l3vNy7ekpY

Septoria seems to be the main disease at Long Sutton demo site this morning. Seen in all varieties @Bayer4Crops pic.twitter.com/Kb1J78TtKn

Istabraq looking good Mn deficient and drilled on the deep side. #septoria pressure is high on these early drilled crops pic.twitter.com/quUAUnl38o

Yellow rust found in late down winter #wheat Myriad variety. Not often seen in Angus Scotland!Sign of how dry its been! #agriculture pic.twitter.com/MljwrC1MKW

Lots of phoma around in susceptible varieties (photo). InVigor varieties showing the benefit of RLM7 plus quantitative resistance. pic.twitter.com/tUHkjC14nf