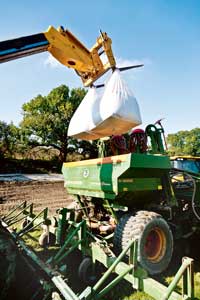 You get the impression there’s a regimented precision with which Northamptonshire growers Andrew and William Pitts treat their wheat crop. Not an ear would be out of place, nor would any leaf receive any less than the attention it deserved.

So it comes as no surprise that the 400ha (1000 acres) of mainly milling varieties are grown for seed. “You build a partnership with a seed house. They’re looking for a good clean sample that germinates, combined on time, ready for collection on time. You have to achieve a high standard and it’s a good discipline. So we aim for a high yield and a clean crop,” says Andrew.

The wheats are rotated with 200ha (500 acres) of oilseed rape and spread over five units on soils that range from Hanslope boulder clays to Northamptonshire ironstone sands. Named varieties this year are Gallant, Target, Cordiale, Santiago and Scout.

“Growing a decent acreage we need to keep it simple if we’re going to get round it all on time.” Timeliness is critical throughout the season, he adds. “The difference between a good farmer and a bad farmer is about a week.”

BASIS-registered, Andrew manages the agronomy himself and decides which products to use, although he calls on Agrovista’s James MacWilliam for strategic advice. With a planned spend of £75-80/ha on fungicides, up to half of this will go on the flag leaf. 30% will be spent on the T1 spray with the balance “topped and tailed” at T0 and T3.

“I build in subtle nuances for the varieties – Scout is a relatively low-input variety and stays much cleaner. Santiago on the other hand is high input, high output.”

The target diseases are the two rusts and septoria, with eyespot in the frame on second wheats. “Mildew tends not to be an issue. We’d only get it on soils with a manganese deficiency. But a consolidated seed-bed and a manganese seed dressing address any potential problem.”

To help manage yellow rust he is careful not to grow varieties with a similar rust classification together, but this is largely achieved through the split of acreage over the five units.

A T0 is a must. “It’s absolutely routine. It gives you a nice clean start and an insurance if the T1 is delayed.” He keeps this “cheap and cheerful” with a triazole/chlorothalonil mix to cover off yellow rust or just straight chlorothalonil on Scout. Cyproconazole is used if a spring application of Atlantis (mesosulfuron-methyl and iodosulfuron-methyl) is needed.

At T1 he is torn between Tracker (boscalid + epoxiconazole) – “staggeringly good value” – or the new epoxiconazole Ignite – “it looks like it’s a step forward and should knock spots off the rest.”

These will be mixed with Bravo (chlorothalonil). “I do tend to go for brand names at T1 because the formulation is likely to be more reliable. You can be mixing a lot of chemicals and the last thing you need is a bunged-up sprayer.”

This year he is considering using a strobilurin at T1. “If Comet (pyraclostrobin) comes in at a sensible price I’ll use it. It’s been displaced from the T2 slot, particularly on lighter soils. At T1 it gives greater rust protection and adds some physiological action.”

At T2 he goes for “yield, yield, yield” and is planning to splash out on new chemistry this year. “I’d like to use Aviator (bixafen + prothioconazole) at no less than 1 litre/ha – possibly go as high as 1.25 litres/ha. For the £6-8/ha premium you could gain an extra £40/ha yield, so it’s a no-brainer.”

Failing that an epoxiconazole/pyraclostrobin mixture is planned, with the possible addition of boscalid. “If I’m going to spend on fungicide, this is where I’ll do it. Big returns warrant a big investment.”

The T3 will revert back to triazoles, says Mr Pitts, with tebuconazole or prothioconazole most likely. “I believe strobs no longer have an effect on mycotoxin-forming fusariums, so there’s no point in using them there.”