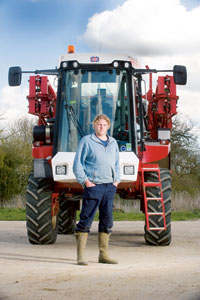 Rob Cannell has been a sprayer operator for four years, spraying a massive 10,000ha of wheat, oilseed rape, spring beans and sugar beet each season at Dennington Hall Farms in Suffolk.

There are times of the year when the cab of the 4000-litre Bateman RB35 sprayer acts his second home with just a radio for company.

It is early on a Tuesday morning and Rob is already milling about his farmhouse yard preparing for work. Rob got up at 4.30am for breakfast and to listen to weather reports on the radio.

“I’m concerned about possible spray drift as the wind speed is forecast to pick up this afternoon.” To minimise drift, he will set the boom height at 40-50cm and air induction nozzles.

Rob jumps in his white Skoda pick-up and heads to the spraying shed. “Today is typical. We’ll be spraying early morning and probably in the evening, if the weather holds out, with a brief stop for lunch,” he says.

Rob opens the huge metal shutters to reveal the farm’s Bateman RB35 sprayer, with 32m boom and 4000-litre tank. The sprayer was chosen for its capacity, reliability and good back-up service. It has an Ag Leader Insight GPS system with Norac boom levelling. He uses GPS for variable applications having mapped all the fields.

After donning protective overalls and masks, we enter the chemical shed and he checks his paperwork and writes himself a note of the chemicals needed for the first operation – a T2 fungicide spray for winter wheat.

“A flag leaf spray, the most important one we do,” he says. Rob loads his red trolley with chemical cans and wheels them to the sprayer.

After final checks, Rob begins his familiar routine of unscrewing can lids and carefully removing aluminium protective seals with a knife. He opens the induction hopper and pours in the chemicals. Rob attaches the water pump and adds 3000 litres of water to complete the mix.

Just over an hour later and he is ready to go and we begin a three-mile journey to a contract farm to start T2s. En route, Rob tells me he’s expecting a productive day.

“We’ve got a big sprayer and fairly small fields. The wind has died down a bit in the past half hour, which is encouraging.”

We arrive at the first field of Viscount, a soft milling wheat. The flag-leaf spray mix contains Ennobe (epoxiconazole and prochloraz), Opus (epoxiconazole) and Comet (pyraclostrobin).

“We’re targeting septoria, rusts and other diseases like fusarium. Terpal is being added as a growth regulator.”

His nozzle choice is an Amistar 035 variable pressure air inductor nozzle, specifically designed for applying fungicides. Rob says he travels between 15-16kph when using these nozzles, but will slow to around 11kph if he is targeting blackgrass with a herbicide.

Rob completes the last of the four contract fields, belonging to a grower who operates a high input/high output strategy. “We have got one combine and 3500 acres so we can’t afford any flat wheat.” Rob is satisfied that he has achieved his target of 100 litres/ha. He completes his paperwork using Farmplan Gatekeeper noting start and finish time; date; weather such as temperature, wind speed and direction; and ground travelling conditions. It’s back to base for a refill.

Rob uses spray tank cleaner All Clear Extra to remove unwanted spray deposits from tank and equipment. He triple rinses containers and hangs them to dry on a drainer converted from a cattle foot bath. Farm manager Shaun Keal hands him the job sheets for his next task. We set off again – this time to spray T2 fungicides on Oakley winter wheat on the estate’s own fields.

Before spraying, Rob gets out of the cab to check the crop. “Last week, I applied Alley Max SX (sulfonylurea) to tackle groundsel and thistles,” he says. “It seems to have done its job.”

Field number five of Oakley has been completed. On the return journey, I ask how he likes his job. “I always call it a ‘Marmite job’ you either love it or hate it,” he says. “You are either ‘into’ your spraying and combines, or you’re a cultivations man. I’m definitely the first and not the latter.”

He doesn’t mind spending large amounts of the day working alone, passing the time listening to the radio. “I listen to Farming Today at 5.45am on Radio 4, then Radio 2, or 5 Live.” 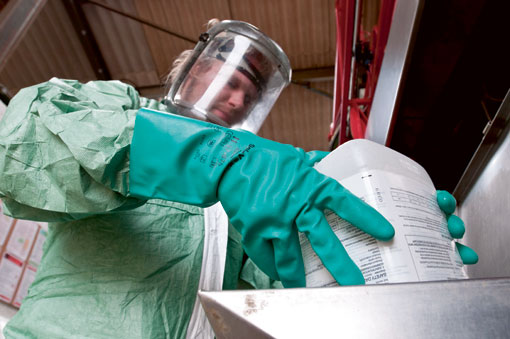 We travel back to base for another fill-up. This time, Rob loads a reduced tank mix without the Terpal growth regulator. After this he has finished, we set off to spray three fields of Viscount.

Wind speed is very important for spraying and ideally should be no more than Force 1 or 2, Rob says. However, the wind has picked up to Force 3 and Rob has decided to stop spraying for the day because he’s concerned about spray drift.

“It’s touch and go, it may be best to stop for the day,” he says. He takes his public responsibility very seriously and notifies the public after spraying. “I have metal spike notice boards which I carry on the sprayer. I display them to warn people when a field has just been sprayed at the start and finish of footpaths next to fields.”

Rob completes his paperwork and we travel back to base. He grabs 20 minutes to eat his packed lunch then launches into sprayer maintenance. As well as routine checks and greasing, Rob fits a new flow meter, which takes up most of the afternoon.

After a long day’s work, Rob goes home. But within an hour, he’s back at the farm welcoming members of the Suffolk Farm Machinery club on a farm tour. It’s been a long, busy day and Rob will be back in his sprayer cab in the morning starting all over again.

Q: How did you get into farming?
A: I was born into farming – it’s in my blood. I’ve tried other things, but I always come back to farming.

Q: What are your hobbies/interests?
A: Kayaking. I own two ocean kayaks. My wife Sophie and I take them on local rivers. I like spending time with Sophie and our three children. I’m a music fan and I like listening to rock music, especially Led Zeppelin.

Q: What does it mean to you to win the Syngenta Farm Sprayer Operator of the Year?
A: I’m chuffed. It’s nice to get the recognition for putting the effort in. I’m sure it will make a big difference to my career and it’s also good advertisement for the farm.

Q: What would you like to be doing in five years time?
A: I’d like to still be spraying. I’d also like to become more involved in some trials or research work around application technology.

I’m very interested in how different nozzles behave in different conditions. I’d like to try and achieve the optimum coverage for products and make sure they are still usable.

When I went to my careers officer at school I didn’t get the impression he thought farming was a job option he should be promoting to students. Sadly, there is still a misconception that all farming involves is turning up with a pitchfork and getting your hands dirty.

People don’t realise that experience and technical expertise are required for the essential jobs – and as a result how fulfilling the job can be. With his hard work, commitment and energy, Rob is a beacon to so many sprayer operators up and down the country. Careers officers should take note.