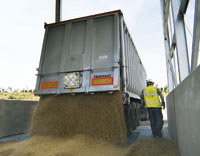 Grain merchants are investing millions of pounds in new central stores this year, but what has sparked this activity and how will it affect the market? Olivia Cooper finds out

The grain chain is experiencing something of a revolution this year – a spate of new central stores is set to transform the way the whole industry operates. After decades of low investment in on-farm stores, and rapid expansion in combine capacities, the time is ripe for change.

“A combination of factors is driving the investment,” says Openfield’s Rob Sanderson. “Farm structures are changing – old grain stores are reaching the end of their useful life, and there are many contract farming arrangements. Combines are capable of cutting 60-70t an hour compared with 70t a day a generation ago, and the infrastructure on farms is struggling to cope.”

Consumers are also demanding more secure supplies of good quality grains, he adds. “Consistent and efficient delivery of raw materials into their processing plants is becoming key.” Merchants and co-ops are therefore installing more storage around the country, with rapid throughputs and processing facilities, to meet demands from both farmers and consumers.

Openfield is working with a number of partners to expand and improve central stores from Scotland to Kent, and is enjoying 10% annual growth in grain throughputs. Ready for this harvest will be an extra 19,000t capacity at Woldgrain’s revamped Hemswell site in Lincolnshire, taking its capacity to 49,000t, with a further 36,000t planned over the next three years.

“All of that capacity has been assigned for this year.” New 500t/hour intake lines, 100t/hour processing and drying facilities, and 800t overhead loading hoppers will result in a far more efficient operation.

Further West, Wiltshire Grain has expanded its capacity by 20,000t and added new high-speed driers over the past two years, with a further 10,000t planned for next harvest, says Mr Sanderson. “We’re currently evaluating other sites including a project in the Cotswolds – we may double capacity at our Stratford upon Avon site to 50,000t.”

In Cornwall, Kernow Grain will have 20% more capacity for this harvest, and in Kent, Weald Granary has new outloading hoppers and may expand further in 2011. Openfield is also upgrading its facilities at the Ridham Sea Terminal in Kent, to speed up loading times. The investment, which should be in place for this harvest, includes a new weighbridge, automated sampling equipment, a grain laboratory and improved crane and elevator systems.

Another sea terminal is set for development, with construction of a new 45,000t grain store and handling facility at Montrose in Scotland due to start in October. The first phase of 25,000t should be ready for July 2011, but strong demand from members of Angus Cereals means work may have to be brought forward. With intakes of 5000t a day, and a drying capacity of 150t/hour for malting barley, the facility should help to alleviate Scotland’s historic problem of forced grain sales at harvest. “For the first time Scotland will have a quayside processing plant, which will open up new opportunities for export cargoes. The value to Scottish agriculture is quite significant,” says Mr Sanderson.

Further north, Aberdeen Grain is planning an extra 14,000t capacity ready for harvest 2011. Other projects for the future include an 85,000t advanced processing centre at Snetterton, Norfolk. A 9.3ha site has been secured and local growers have been asked to sponsor the planning costs. “If the farmers want it, the opportunity is there – from the feedback we’re getting it’s almost certain that will go ahead by 2013.”

Although clearly a year of massive investment, central stores are about two-thirds cheaper than on-farm projects, says Mr Sanderson. “The cost of doing this on farm is prohibitive; it is the scale that is making it more affordable. There is a strategic shift going on within UK agriculture. In the past we only competed on price – now we’re looking at the value we offer to both farmers and consumers. Quality and provenance are vital.”

Philip Darke, store manager at Camgrain, says the co-op spent £12m last year on its new 90,000t store at Wilbraham, which has planning permission to expand by another 210,000t to meet member demand. “We’re building all the time.” It also has permission to develop a similar sized facility in Northamptonshire, which will take Camgrain’s total storage and processing capacity to more than 500,000t.

“There are many growers in Northamptonshire who want a central grain store – a lot of flour milling facilities are based there so it’s a good central location. When you build big you get a reduced carbon footprint, and our farmers have the opportunity to work directly with large consumers like Sainsbury’s.”

New markets will also be available to farmers in East Anglia, with the opening of Gleadell’s new £5m Great Yarmouth portside facility in July. With a mobile ship loader capable of filling 25,000t vessels at 1000t/hour, the merchant will be able to export to almost anywhere in the world. The 20,000t store will also eliminate double handling and haulage of grain, beneficial to both suppliers and the environment, says managing director David Sheppard.

“The drying facilities will also enable us to meet the higher specifications that some export destinations require. Without doubt the facility will raise the value of grain in East Anglia.”

In Cambridgeshire, Fengrain has joined forces with Glencore to supply the new Ensus bioethanol plant with grain stored at Wimblington. Glencore is also working with Great Tew Estates to open a new 35,000t grain processing centre near Chipping Norton, Oxfordshire, in time for this harvest. “The arrival of a first-class processing facility in the heart of the Cotswolds is long overdue,” said a spokesman for Glencore. “It will enable growers to enhance the marketing of their crops and create new opportunities as consumers move towards vendor-assured schemes.”

Frontier, which has 400,000t of storage capacity, is investing about £1m a year on improving and upgrading its facilities. “One of the biggest drivers is the amazing growth in combine technology,” says the firm’s Jon Duffy. “Handling and processing at older stores can create bottlenecks; we need to be able to turn the grain round as quickly as possible.”

The merchant has also joined forces with a group of Hampshire farmers to install two driers at Southampton docks to eliminate double handling of wet grain this harvest. “It makes huge sense to put the driers at the port, reducing costs and improving logistics.”