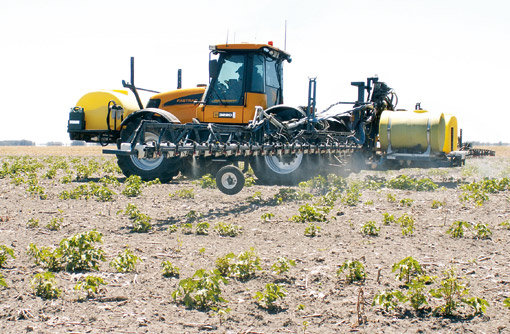 On a recent visit to the UK, Argentinean agronomists Marcelo Valdez and Sergio Morichetti outlined the reasons behind rapid increases in production over the last decade. Adam Clarke reports.

The expansion of cropped area and rapid adoption of new technology have seen Argentinean grain production increase 135% since 1994, and along with other emerging giants such as Brazil, threaten to leave Europe and the UK behind.

“Production in Argentina was around 40m tonnes 10 years ago, and we are hoping to reach 120m tonnes in a further 10 years,” said Marcelo Valdez, agronomist for Aceitera General Deheza (AGD), based in Cordoba Province, Argentina.

AGD is leading national exports in peanuts and peanut oil, and also grows maize, soya bean and wheat; however, wheat is seen as a winter break crop in the rotation as 75-80% of rainfall is during the spring and early summer.

“We grow our wheat predominantly on irrigated land where we can achieve higher yields, and last year averaged 4t/ha across dry and irrigated production,” said Mr Valdez. “Our limitation is water, but we can improve the understanding of crop nutrition and disease control to keep increasing yields.”

“We also produce branded products such as cooking oils and peanuts for human consumption,” said Mr Valdez. “We have around 200,000ha of land in production, with 3.3m tonnes storage capacity and the ability to crush up to 23,000t of oilseeds a day.”

AGD also offers agronomy services, is the number one fertiliser and pesticide distributor in Argentina and a major supplier of precision farming services, with over 100,000ha of service, Mr Valdez said.

The use of technology such as no-till cultivation techniques, fertilisers, pesticides and precision farming have been drivers for rapid increases in production, said Mr Valdez. The use of Silo-bags for grain storage has also contributed.

“In Argentina, 50% of the land is rented on a short lease which restricts investment in long-term storage,” he said. “Silo-bags enable us to store large quantities of grain at a low price, making logistics from field to elevator much easier.

“Timeliness at harvest is important and Silo-bags enable us to harvest crops at the optimum time, however, grain must be at the correct moisture content to be stored for any length of time.”

Perhaps the main technology driver of Argentina’s agricultural boom has been the use of genetically modified organisms (GMOs). There has not been the public and governmental resistance to the adoption of GM technology in Argentina that has been seen in Europe.

This has resulted in most of the cropping area now using the technology, with herbicide and pest resistant varieties widely grown.

GM technology has not come without its challenges though, said Sergio Morichetti, AGD agronomist. “We have seen the development of Roundup resistant weeds since the introduction of the technology,” he said.

“We are looking to rotate herbicides with various modes of action to control the tolerant weeds,” he added.

Despite the problems that the technology can provide, Mr Morichetti expects Argentina to remain at the forefront of new advances.

“New genetics are required to combat pests and diseases, which can further increase our yield potential, especially with soya,” said Mr Morichetti. “Drought and salinity resistance will help us to expand our production area further if necessary.”

Precision farming technology is another area that AGD will be looking to utilise, optimising fertiliser and chemical use and reducing costs.

“We are testing electro-conductivity equipment to accurately map soils and make prescriptions for organic matter, pH and all nutrients,” said Mr Morichetti. “Subsequently, we can use variable rate applications and save on inputs.” 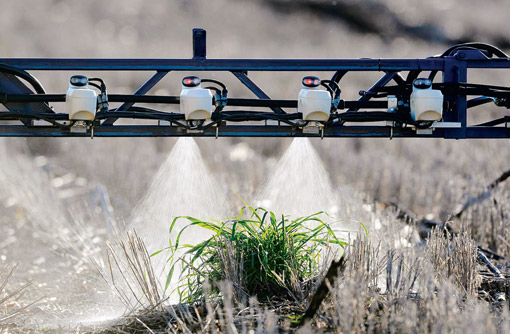 A spraying system which uses optics and computer circuitry to identify and spot spay weeds is being trialled by AGD with the aim to cut herbicide use significantly.

“We have imported the system from Australia, where they have a similar climate, so we are hopeful that we will have the same success as they have seen over there,” said Mr Valdez. “At present, it is the only one in South America.”

This year will be AGD’s first full season with Weed Seeker, after which Mr Valdez and his team will have more knowledge and will make any adjustments needed to optimise performance in Argentinean conditions.

“Our first results showed a 70% saving in total volume of spray applied which is very encouraging and will result in substantial chemical savings,” he added.