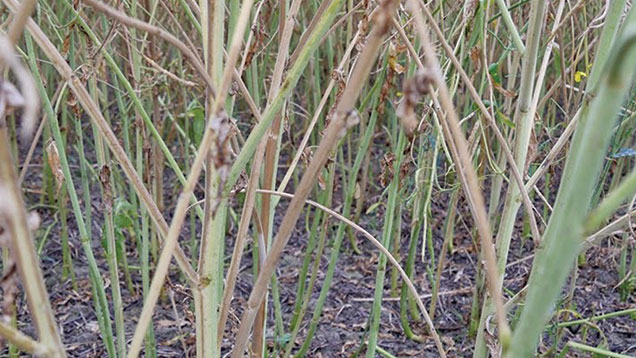 It’s more than seven years since a key fungal disease that affects oilseed rape crops was first confirmed in UK crops and farmers are being warned it could get much worse, reducing yields in crops.

Verticillium wilt infections in oilseed rape last summer were at a similar level to the previous year, according to a Defra-funded nationwide survey by Fera.

But the weather-dependent disease could take off if warm autumns and mild winters become more common, warns Fera’s Judith Turner.

Met Office reports state that four of the past five years have been warmer than average.

Since the soil-borne fungus Verticillium longisporum was first found in the south of the country in 2007, it has spread to all regions of England.

The characteristic grey striping and discolouration of oilseed stems and branches doesn’t show until June or July, when plants start to ripen prematurely and pods shrivel.

As stems split or are harvested, the pathogen’s black microsclerotia – fruiting bodies – fall to the ground.

Infection begins at the seedling stage of the oilseed rape crop, and as it develops, it blocks the water-bearing vessels in the stem.

Depending on severity, yield loss ranges from 20-80%, according to research in continental Europe, where wilt is common.

Here in the UK, yields losses haven’t previously been seen. But estimated losses of up to 20% could be attributed to verticillium wilt last season, believes Colin Button, seeds manager at Hutchinsons.

He is concerned the level will be higher this summer following the mild winter.

“The soil burden has probably been building up as varieties succumbing to wilt have been widely grown. We are in danger of seeing a widescale problem here as is common in many parts of Europe.”
Colin Button, Hutchinsons

“The soil burden has probably been building up as varieties succumbing to wilt have been widely grown. We are in danger of seeing a widescale problem here as is common in many parts of Europe.”

There is no specific chemical treatment option for the soil-borne disease, and HGCA trials investigating the benefit of using fungicides failed to confirm Amistar (azoxystrobin) as a useful pre-drilling soil treatment or early flowering spray.

The European experience suggests emphasis must be placed on varietal tolerance and good management, including crop hygiene.

“Some varieties appear to be more tolerant than others, but it’s difficult to identify why, and there is no genuine resistance to verticillium wilt. Fortunately plant breeders are now selecting for good early vigour to counter the effects of the disease,” says Mr Button.

Modifying oilseed rape’s frequency in the rotation to no more than a one-in-four rotation is thought to be prudent. Ideally, he would like to see a five-year gap, especially where the disease is known to be present.

“Whatever the rotation, we recommend carrying out suitable cultivations, conserving moisture, choosing a variety with proven strong early vigour, and giving the crop every chance to emerge quickly.

“This may mean using starter fertilisers and seed treatments such as Radiate to aid consistent establishment.”

When it comes to sowing date, avoiding early August and high soil temperatures (above 15C) may alleviate the risk of severe yield loss, he suggests.

“Anything that allows good stem and root development to keep water moving through the plant and help overcome the early disease threat should be beneficial.

“And keep an eye out for wilt symptoms in the final stage of development just before harvest so you can choose appropriate varieties for next season,” he says.

German farmers have faced much higher pressure from verticillium wilt over the years, so what can UK grower learn from their experiences?

An estimated 1-7% of the total oilseed rape crop in Germany is lost each year to verticillium wilt. And over the past five years, that may have amounted to a loss of 300,000t.

Alex Doering, oilseed rape specialist at seed breeder DSV AG, based in Lippstadt, has seen the disease at its worst in trials.

He is working with DSV UK to share experience of the disease to minimise potential crop losses in the future and ensure continued high tolerance in the company’s UK varieties.

The pathogen can live in soils without a host crop for up to 10 years, so a move to wider oilseed rape rotations helps to minimise the threat, says Dr Doering.

However, he knows that is not always practical.

“In areas where verticillium wilt is present, we’ve found a one-year-in-three rotation resulted in more than 40% of plants being infected, whereas shifting to a one-in-six-year rotation reduces this to just over 12%.”

Despite agronomic research efforts, the incidence of wilt in Germany has risen during the past 20 years and although levels vary from region to region, it is now widespread across the country. Preventing its spread to new areas is dependent upon good crop hygiene, which is easier said than done, he says.

“Choosing a variety that tolerates the pathogen is the most effective way to prevent and control yield losses from verticillium wilt. So we are focusing on wilt tolerance as a core breeding objective, today and in the future.”

DSV is the driving force behind UK varieties such as Incentive 45, which topped both the Northern and East/West HGCA Recommended Lists last year, and Popular, the highest-yielding mainstream variety on the current list.

“The bottom line is that there is no true resistance available that gives 100% protection. Even varieties with good tolerance can become infected, but the spread of the disease within some is more restricted than in others.

“We have worked hard to ensure all our mainstream varieties share the right set of attributes to give them the best tolerance to verticillium wilt possible.”