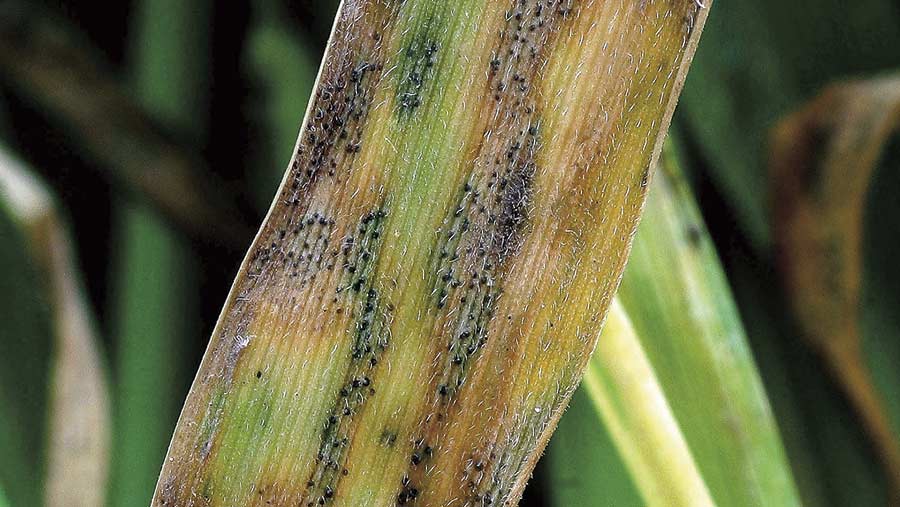 Growers are being strongly advised to use an SDHI fungicide in a mix with other actives at both the T1 and T2 timings to “keep septoria guessing” and prevent a rapid build up of disease resistance.

Agrii’s Clare Bend says managing septoria resistance to SDHIs is “absolutely crucial” as resistant strains are now beginning to show up in the field.

“We need to manage this as there is no new chemistry coming until 2019. We are strongly urging that people make as much use of the whole fungicide tool box as they can.

“If we don’t, then you will select a resistant population very quickly – perhaps within a year if the same actives are used over T1, T2 and T3,” she warns.

Resistance to strobulirin fungicides developed in 2002 and Mrs Bend explains that this was a very sudden breakdown of efficacy. In contrast, the decline of azole chemistry has been more gradual, with the eradicant activity of this fungicide group still heading south.

While stressing that it is a complex situation, she predicts that the change in resistance to SDHI products, which currently offer the best curative activity on septoria, will be somewhere in between that of strobulirins and azoles with the gradual selection of many different septoria mutations.

Mixing an SDHI with the multisite chlorothalonil and an azole, along with using different azoles at T1 and T2, is the best course of action, she suggests.

“Multisites are important but they only sit on the leaf, whereas azoles and SDHIs actually get into the leaf and they protect each other.”

Adopting a preventative approach is also key, with Agrii small scale trial work showing a 0.75t/ha penalty when opting for a four spray programme with an SDHI used once compared to the same programme with SDHIs used twice.

Mrs Bend points out that this trial used the winter wheat variety Solace, which has moderately good septoria resistance, so the difference in yield could well be even greater on more susceptible varieties.

“People are hearing the message on growing resistant wheat varieties now and long may it continue,” she adds.

One or two SDHI sprays?

While growers will be tempted to only deploy an SDHI fungicide at the all-important flag leaf spray timing, Mrs Bend says this is very risky.

Instead, she advocates a preventative plan to avoid the need for massive curative activity at T2, which she explains would put huge pressure on this chemistry and potentially fast-track resistance issues.

“We say keep the disease out early in the season and adapt later on. If you lose control early on in the year by cutting back then you will be chasing – tweak once you know what you’ve got.”

Using a T1.5 should be something that growers consider as a targeted response for when they are “really up against it,” says Mrs Bend.

Agrii trials found the benefit of spraying leaf 2 with a multisite was a 0.9t/ha uplift in yield in south Wales and south west England, where the wetter and more humid climate often leads to a higher septoria pressure.