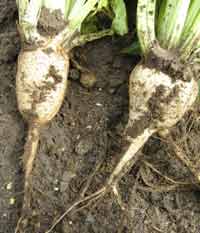 The AYPR strain of rhizomania that can overcome the widely used “Holly” or Rz1 gene in rhizomania-resistant varieties has spread further into North Norfolk.

Originally discovered in the Orford/Woodbridge area of Suffolk, where there are now 20 fields with the resistance-busting strain, the strain was found last year in the Heacham and Blakeney areas of North Norfolk, Mark Stevens, head of crop protection at Broom’s Barn Research Station, told growers at the British Beet Research Organisation’s winter conference.

That added to the previous year’s discovery of the strain in the Thetford area, he said. “It is still a very small problem, but we now have three areas in the eastern region, where we see it starting to develop.”

Tests carried out at the North Norfolk site showed that roots within the affected patches could weigh up to 70% less, with 2-4% less sugar content. In a field in Suffolk, where infection was later, yield losses were less at around 30% (0.5kg/root) with 0.5% decrease in sugar content.

“The good news is there are genetics coming through that complement the Holly gene to give enhanced resistance that are a way of combating the AYPR strain.”