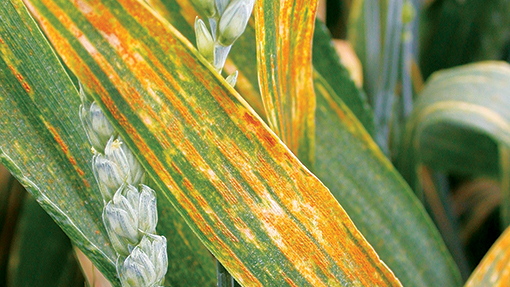 The more aggressive strains of yellow rust being seen in the UK may have originated in Asia and could indicate a growing threat from overseas, experts are warning.

The Warrior-type race of yellow rust was first found back in 2011 and it is virulent against a wider range of resistance genes. It was notable for overcoming resistance in the variety Claire, which has implications for related varieties Beluga, Alchemy and Horatio.

The latest UKPCVS survey results for 2013 show that the Warrior-type races are now the most common, accounting for 20 out of 24 isolates.

Amelia Hubbard of NIAB added that the narrow genetic range for resistance meant that in 2013, up to 75% of UK wheat was susceptible to the newly emergent Warrior races.

So where has the Warrior-type races come from? One clue may be in the genes.

Diane Saunders of the Genome Analysis Centre has been looking at the samples collected in the UKPCVS survey over a number of years.

Her team is investigating the genetic sequence of yellow rust to draw a genetic “family tree” to see how the different races are related to each other.

The results show a big difference between Warrior types and the older UK isolates.

“This raises the possibility that the Warrior type may have been brought into the UK,” she said at a recent UKCPVS meeting in Cambridge.

This Warrior invasion is the latest in a series seen across the globe in recent years, said James Brown of the John Innes Centre.

“There have been 3-4 epidemics caused by novel races of yellow rust in the last 12 years. We are seeing a worldwide long distance dispersal of rust races,” he added.

Prof Brown believes the increase in worldwide travel and the globalisation of breeding with the same types of resistance over a large area of the world are key factors.

“For example, the Yr9 gene is used in varieties grown from Turkey through to Afghanistan,” he said.

To understand future risk, Sajid Ali of the Agricultural University Peshawar, Pakistan, is looking at genetic diversity in yellow rust populations around the world.

He believes the Warrior type races may have originated in Asia ranging from the Himalaya region to Central Asia, as they are similar genetically although not the same.

One unique feature of populations in Asia compared with Europe is that they are much more diverse and he believes it is because they are being re-established by sexual recombination. This keeps adding new strains.

In contrast, older European strains have a low capacity for sexual reproduction, which relies on a wild host and the berberis species, such as the common barberry shrub, is thought to be fulfilling this role.

This higher diversity could have implications for other areas of the world and work is ongoing to understand this process, added Dr Ali.

So what can the UK industry do? “Breeders in the UK have been good at breeding resistance to the old races. While some are effective against the Warrior races, they are overcoming them,” said Prof Brown.

Fortunately, UKCPVS works has shown that 15 varieties still have resistance to all isolates and didn’t show symptoms at the adult plant stage. These include Scout, Crusoe, Relay, Evolution, Revelation and Diego.

Historically, yellow rust has been the top wheat disease, but over the last 30-40 years it has been superseded by septoria, largely because breeders have been so successful in breeding resistance.

“We don’t want yellow rust becoming the top disease again. We need to ensure we have the resistance to new populations,” he added.

In conclusion, Prof Brown and Dr Ali agree that breeders have a role and need to consider external isolates in their selection.

“There is a need to have more diversity to head off the possible changes in disease population due to the increased globalisation of farming and breeding,” said Prof Brown.

The UK Cereal Pathogen Virulence Survey (UKCPVS) is funded by HGCA and FERA and is managed by NIAB.

It has been monitoring cereal rusts and mildews in the UK for more than 40 years, with the aim of detecting and warning industry and growers of new races of disease emerging on resistant varieties.