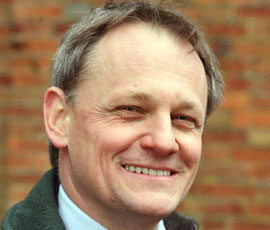 What a busy month! There have been so many interesting people to meet; neighbours, customers, suppliers – and even a new bank manager.

It’s amazing how many people we are all involved with on a daily basis. Even more amazing are the common interests, issues and goals that we all face. How many other industries could say the same?

If I had a memory gauge fixed to the side of my head I’m sure it would be starting to read fairly full right now – and that’s before I start on all the field names, complexities of five HLS schemes, rotations and various associated problems. By the end of harvest, I hope I will have got to grips with the field names and their associated characteristics. After all, you just need to follow the trailer to find the combine.

That said, this year’s cereal harvest isn’t going to require too many trailers and I fear that I will have to be quick to catch the combine in some of the fields. A neighbour recalls how in 1976 he only harvested 500kg/ha (4 cwt/acre) of wheat and that he had sown the seed at 2cwt/acre. Not a massive return for a year’s work. I mustn’t grumble though as I would hate to be called a grumpy old farmer, so l will leave you all to ponder the positives.

I’m looking forward to visiting Cheshire next month to judge the County Farms Competition. Let’s hope I’m back to see some combining rather than winter barley being finished before I go away. It was pleasing to see that the fertiliser manufactures decided not to spoil the Cereals event by making their play even earlier than normal this year. Well, when you have a captive market, why wait?