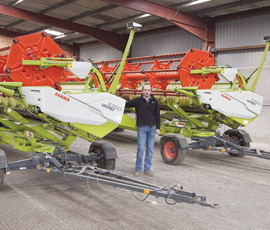 James Taylor is set the finish the bulk of his harvest by the end of this week and is now hoping for some rain to help his newly-sown oilseed rape.

He has drilled about 60% of his oilseed rape and will look to drill winter wheat on fallowed land in the first week of September, so needs some rainfall on his light land in Gloucestershire.

Oilseed rape drilled in early August is largely through the ground, but there is some seed that has not germinated and needs some help from the weather to aid good establishment.

Winter wheat yields were very variable with some crops on light soils burning off in the hot early summer weather.

“These wheats suffered in the 3-4 weeks of hot weather in June and July on our light gravel soils,” Mr Taylor says from the estate he manages just south east of Cirencester.

Better wheat crops yielded up to 9.5t/ha, but the estate average was brought down to around 8t/ha by those poorer crops on the lighter land.

Oilseed rape yields so far are averaging 3.3-3.5t/ha, which he says is reasonable as many crops were hit by slugs, pigeons and the wet and cold winter.

He still has 80ha of autumn-sown rapeseed to harvest which is largely later-drilled crops that suffered from pests and the weather.

Some 80ha of the spring barley variety Propino grown for seed has been cut and yielded 7.5t/ha.

This leaves some 140ha of spring oilseed rape and 100ha of spring beans still to harvest, which are both a good week or so away from being cut.