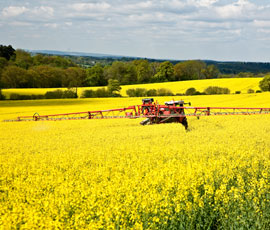 Northern growers should be making propyzamide applications now, according to Dow AgroSciences, but elsewhere it is too early to apply Kerb Flo for blackgrass control.

Soil temperatures had remained steady at just below 10C to 13C, the firm said in its latest Grassweed Emergence Monitoring report. Soil moisture deficits had declined but were variable.

“In northern areas, the time for Kerb Flo applications is here. Measures should be taken to avoid contamination of watercourses. Where crop canopies are advanced, treatments should be delayed until winter die-back or grazing by pigeons allows applications to reach the soil surface,” the report said.

Elsewhere it was too early to apply the product for blackgrass control without compromising optimal efficacy. However, growers should consider the practicality of delaying applications until December on heavy soils or field that did not drain well, Dow pointed out.

“For optimal performance for blackgrass we recommend applications are made when soil temperatures have got down to 10C and are falling, and soil moisture deficits are no more than 50mm and falling at 30cm.”

Where propyzamide was being applied for broad-leaded weed control, as well as annual meadowgrass, applications should be made as soon as convenient, the report added.