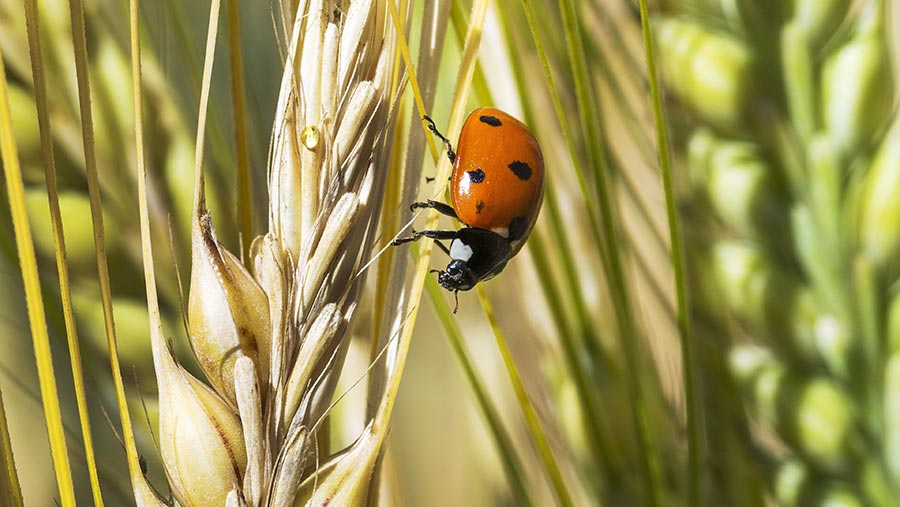 The use of sophisticated biological pest control methods in glasshouses has been a huge success story, helping growers of high-value crops reduce or even eliminate the use of chemical pesticides.

And while transferring this success to arable production may seem like a tall order, experts believe scientific innovation could make this holy grail a reality beyond 2030.

This was the subject of the fourth Arable Horizons lecture at the University of Lincoln, with Harper Adams University’s Simon Leather.

See all of the talks in the Arable Horizons series.

Harper Adams University’s Simon Leather told delegates at the fourth Arable Horizons talk that early success stories include the introduction of ladybirds and parasitic wasps to plum and citrus orchards in the US, and parasites used to control a sugar cane pest in Hawaii and Mauritius in the late 1800s.

However, once pesticides were introduced after the First World War, biological control was largely abandoned because of the highly effective and relatively safe control of crop threats they provide.

“Because they were so safe and so effective, people used them all the time and just like the antibiotics in the medical industry, we now have a problem with resistance,” explains Prof Leather.

There are now more than 500 arthropod species known to have developed resistance to insecticides and over 200 weed species that are resistant to herbicides. Many crop diseases have also become insensitive to certain fungicides.

Other problems with the overuse of pesticides include damage to non-target species, most famously in raptors ingesting DDT in the 1960s and more recently neonicotinoids and their association with bee health decline.

Prof Leather explains that these factors have resulted in active ingredients disappearing, either through tighter regulation or being rendered ineffective.

In addition, it is now much more difficult and costly – particularly in Europe – for agrochemical companies to register new pesticides for use, so the pipeline of products has slowed to a trickle.

“[We might] soon run out of chemical options, so biological control is probably where we should be looking [for solutions] and [try to] go back to that heyday of the 1860s,” he adds.

Find out more about Arable Horizons, and attend the fifth and final lecture.

Biocontrol has been used very successfully in protected environments such as glasshouses for years and transferring this success out into the field is described by Prof Leather as the holy grail.

“Like [discovering] the Holy Grail, it is an almost impossible ambition, but I do think we can go some way to achieving it by looking at what we already have… and use it in imaginative and new ways,” he says.

These would include utilisation of chemical signatures given off by plants to scare off pests or detect infested areas of the crop using an “electronic nose”, allowing targeted application of conventional and biological control methods – something being developed at Harper Adams University.

In addition, biopesticides would play a crucial role, using pheromones to confuse pests and botanical and microbial products to control them, while drone technology could help deliver the biocontrols exactly where they are needed.

One would be a highly automated, robotic agriculture using electronic noses and remote sensing to detect any problems and allow GPS-guided drones to deliver conventional and biological control agents across a similar crop landscape visible now.

The other – and his preferred scenario – is where this use of smaller, more targeted machines and drones allows a change to smaller fields with more conservation margins to encourage natural enemies and a chemical-free environment entirely reliant on biocontrol.

“It will depend on how many people there are and how much food we need to produce as to whether we go for biological-based factory farming or go for a nicer landscape where we can still grow high-yielding varieties, but in a much more diverse way,” says Professor Leather.

What can agriculture learn from glasshouse biocontrol success?

Independent pest management consultant Rob Jacobson, who has vast experience in implementing biocontrol in glasshouses, believes there is much that can be learnt from the successes of biocontrol in high-value glasshouse crops.

The adoption of biocontrol in glasshouses was driven by insecticide resistance in key pests, combined with the introduction of bumblebees for crop pollination meaning growers cannot use broad-spectrum insecticides – two problems now affecting arable producers.

Dr Jacobson explains that in many of these high-value crops, such as tomatoes, biocontrol agents such as predators and parasitoids released into the glasshouse form the backbone of integrated pest management, but are combined with a whole range of measures.

“[Biocontrol] has got to be part of an integrated pest management programme… and forms the backbone, but we also draw on physical and cultural techniques and these are all integrated with the careful use of compatible chemicals,” he adds.

He believes that transferring this into the field is possible, but at present suitable products are in short supply and much more resource is required for research and development of biocontrol tools for arable farmers to use.

“The gaps in the armoury need to be identified, a suitable range of products developed and then implemented in the field,” said Dr Jacobson.

New generation of biopesticides will be safe and effective

Each strand of selected RNA is tailored to a specific organism’s genetics, which means that while it kills the target pest it is extremely safe for non-target organisms such as bees, as well as for consumers.

Max Newbert, insecticide expert at Syngenta, says another key advantage of this approach is that the products are applied using traditional crop spraying methods, making it easy to slot into current crop protection programmes.

Trials in the US have already had great success in controlling Colorado potato beetle and the milkweed leaf beetle.

Dr Newbert explains that it also works for soil-dwelling pests such as corn root worm, and sucking pests such as aphids, as the RNA can penetrate the plant leaves they are feeding on, allowing them to ingest the biopesticide.

“It could be the cusp of a new future for crop protection. It has all be benefits that we want, including high efficacy, high specificity, low risk and residue levels,” he says.

Syngenta invests around £1.1bn/year in global agriculture R&D. Its advances in the field of crop genetics and plant breeding have been instrumental in enhancing the productivity of farmland, and enabling more effective practical integrated crop management programmes to create profitable and sustainable intensive farming systems, now and in the future.