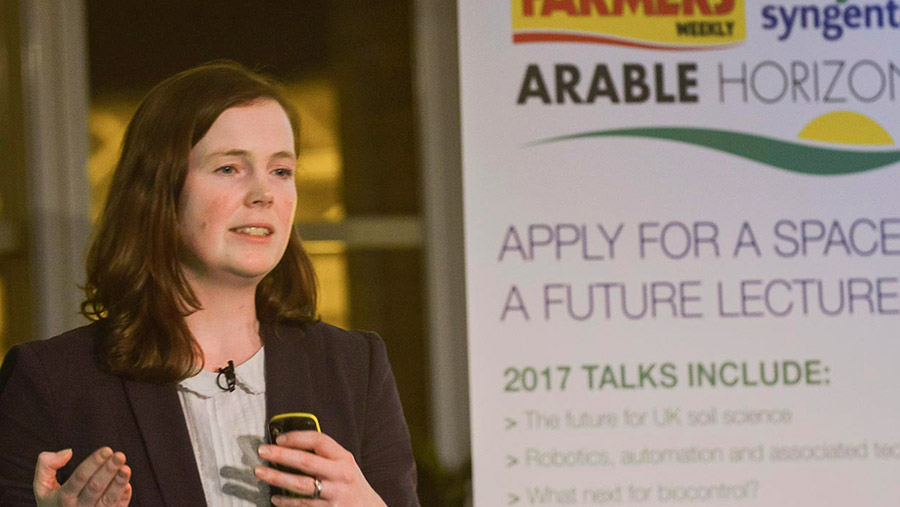 A genetic toolbox held at the fingertips of plant breeding scientists is set to completely revolutionise the way crops are grown in UK fields over the next 20 years.

This was the topic of the first of five Farmers Weekly Arable Horizons interactive lectures, in association with Syngenta, examining some of the most exciting and innovative scientific research in agriculture.

Speaking at the lecuture, Alison Bentley, director of genetics and breeding at Niab, outlined the advances driving crop improvements and the changes that could be seen on farm within in the next 15 years.

Dr Bentley said these advances can overcome growing resistance to key pesticides and the challenge of breaking the grain yield plateau as pressure mounts on natural resources such as land and water.

How cropping could look in 2030

Variety registration based on predicted performance Instead of breeders putting new varieties through years of national and Recommended List trials, genomics can be used to accurately predict field performance and bring them to market faster.

Prediction of disease epidemics in advance Genomics will allow a new age of proactive breeding to produce varieties resistant to the next race before it evolves.

Incorporation of plant and soil genomics Better prediction of the link between crop performance and soil health by genetically mapping the soil microbiome will be possible, so crop type or variety can be tailored to an optimum soil environment.

Novel seed treatments based on molecular targets Targeting pathogen virulence and/or host resistance pathways will be possible with micro-RNA delivered in a seed coating. RNA can interfere or suppress the activity of certain genes.

High-yielding crops not reliant on chemical inputs Genetic modification or gene editing technology will produce nitrogen-fixing cereals that require no artificial N and crops with more robust pest and disease resistance for reductions in pesticide use.

Full genome sequencing allows scientists to map all the genetic information or “instruction manual” contained within an organism, from simple bacterium to plants and animals.

For agriculture, knowing the genetic code of major crops allows breeders to identify genes responsible for certain characteristics, such as disease resistance, and to more accurately select desired traits during the breeding process.

Genetic sequencing of plant pathogens can also help better understand crop diseases, such yellow rust in wheat, and allow growers to stay one step ahead of any changes in virulence.

Modern wheat has relatively little genetic diversity for breeders to select from compared to its wild relatives.

To address this, scientists are using diversity breeding to effectively go back in time and “re-synthesise” the evolution of wheat by crossing durum wheat with wild goat grass relatives in an attempt to reintroduce genetic traits desirable to modern agriculture, such as disease resistance or drought tolerance.

GM is the manipulation of an organism’s genome by either introducing or taking away genetic material to improve or change its behaviour.

This is carried out in two ways. The first method uses a pathogenic bacterium called agrobacterium as a vehicle to deliver a desired piece of DNA into a host’s tissue. The second uses a particle gun for the same purpose.

In plant breeding, GM technology can be used to make crops more resistant to pest and disease threats, tolerant to herbicides or more nutritious for consumers.

Gene editing is an extension of GM technology, but uses “molecular scissors” to insert, delete or replace DNA in an organism’s genome, but in a much more targeted way.

There are a number of gene editing techniques, but the latest pair of scissors available to gene-editing scientists is Crispr (pronounced crisper), which has been hailed as a gamechanger.

A specifically designed mechanism recognises the piece of DNA to be cut and guides the molecular scissors to its location on the organism’s DNA sequence. Once snipped, the DNA tries to repair itself and inserts a genetic “stop signal”, knocking out the function of an undesirable trait.

Examples of gene-edited crops already on the market in the US include a browning-resistant button mushroom, an improved storage potato and a waxy maize variety that produces a higher starch content for processors.

During the Arable Horizons lecture, the audience could use their smartphones or tablets to take part in questions on crop breeding and genetics. Here are the results of two key questions.