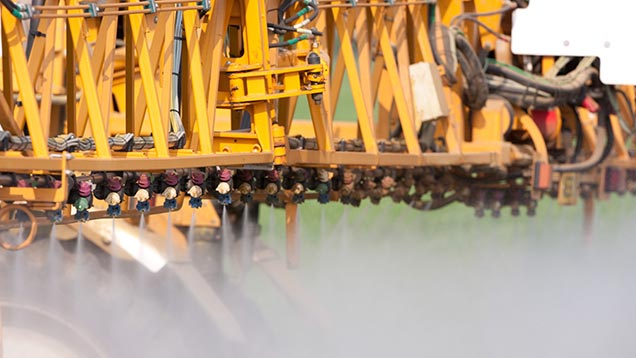 Growers have been warned that uncontrollable insect pests will soon begin to slash crop yields unless action is taken to reverse the loss of effective insecticides to resistance.

The rise of herbicide-resistant blackgrass should serve as a stark reminder of the perils of relying too heavily on chemicals and some experts believe there is potential for a similar situation with resistant pests.

Since the introduction of cheap synthetic pyrethroids that control a wide range of pests, they have become one of the most commonly applied insecticide group.

Resistance to its mode of action is now widespread in a large number of crop-damaging insects and suspected, but not confirmed, in three more.

There is also resistance to carbamates (for example, pirimicarb) in the peach potato aphid – perhaps the most adaptable pest of them all, with its huge host plant range and ability to overcome chemistry.

Independent entomologist Alan Dewar tells Crops this recent evolution of resistance in several species suggests a huge background selection pressure from the overuse of such insecticides.

Recent Defra pesticide use surveys confirm consistent high use of pyrethroids over a number of years in oilseed rape in particular, but Dr Dewar notes that sprays may not be necessary every season.

“The same is probably true in potatoes and risk-averse agronomy is to blame. Advisers are concerned of being held accountable [for pest damage] and the subsequent overuse causes resistance.”

See also: How glyphosate-resistant weeds will infest all US crops by 2020

Dr Dewar also notes a significant factor is the use of suboptimal rates in a tank mix with, for example, autumn cereal herbicide applications, to “tidy things up”.

“Advisers are concerned of being held accountable [for pest damage] and the subsequent overuse causes resistance.”
Alan Dewar

He believes this has contributed to resistance in grain aphids, with this pest caught up in “ubiquitous” low-dose applications in cereals targeting the main barley yellow dwarf virus vector, the bird cherry-oat aphid.

“If you think about it, you couldn’t devise a better way of selecting for resistance. A product rate is there for a reason. It is absolute irresponsibility, industry driven and not in the slightest surprising.”

Carrying out insecticide resistance research at Hertfordshire-based institute Rothamsted Research is Steve Foster, who agrees the reliance on pyrethroids is worrying.

He explains the group of actives are inherently vulnerable to resistance and the more they are used, the more likely they are to “keel over”.

“We are now facing the ‘double whammy’ of not just resistance, but also legislation, with the ban on neonicotinoid seed treatments in oilseed rape an example of this.”

Dr Foster says maintaining a diversity of modes of action is crucial to slow the shift to resistant pests, with it being a question of when, not if, a species will evolve to withstand a particular pesticide.

He is concerned that removing systemic seed treatments such as neonicotinoids in oilseed rape – which reduce adult flea beetle damage and turnip yellows virus carried by peach potato aphids – is only serving to fan the flames.

“Taking away treatments that work systemically removes the route [of applying insecticides] that is often less vulnerable to resistance, which is a dangerous game.

“If anything, you should keep treated seed and get rid of foliar applications, which are much more vulnerable to resistance. The ban was brought in with no thought to resistance management,” says Dr Foster.

The result is an increase in foliar applications of pyrethroids, but also foliar neonicotinoid products such as Biscaya and InSyst and feeding blockers such as Plenum and Teppeki.

These are considered “resistance busters” for pyrethroid- or carbamate-resistant pests such as peach potato aphids and places more pressure on these active groups.

Neonicotinoid insecticide resistance in peach potato aphids is already widespread in peach-growing regions of southern Europe, so it could soon be found here.

This is ongoing using Rothamsted’s extensive suction trap network and screening assays on live samples collected from the field and protected crops.

Low resistance (Nic R) is present, but not enough to result in foliar neonicotinoid control failures.

“The good news is that the [strongly resistant] Nic R++ southern European peach potato aphids don’t seem to be moving off their hosts, so the biggest potential risk is bringing them in on imported plant material. But the increasing use of foliar neonicotinoid sprays means resistance is more likely to develop independently in UK populations,” he explains.

The sugar beet industry is one sector that would be hit particularly hard by the loss of neonicotinoids to resistance – or even regulation if the insecticide group was completely banned.

“If we lost all neonics we could be under real pressure from peach potato aphids.”
Mark Stevens, BBRO

Neonicotinoid seed treatments have almost eliminated virus vectored by the peach potato aphid in beet crops, with levels now at 1% or below across the British area.

“If we lost all neonics, which could happen at the end of this year, the effect will be enormous and we could be under real pressure from peach potato aphids,” he says.

At present, sugar beet growers have no approved viable chemical alternative to neonicotinoid seed treatments, so the BBRO and other stakeholders are looking at existing and novel chemistry and breeding virus-resistant varieties to ensure growers aren’t left defenceless.

In the meantime, Dr Stevens urges growers to think about neonicotinoid resistance management across the rotation, with the peach potato aphid also a major problem in oilseed rape and potatoes.

“If there is a problem elsewhere and aphids exceed threshold, consider using one of the other products [for example, Plenum], that aren’t available in sugar beet,” he adds.

With insecticides reducing in efficacy and the pipeline of new modes of action almost grinding to a halt, growers must look to alternative methods to support the chemistry.

Dr Dewar says proper, regulated integrated pest management, where a problem is assessed and treated according to risk, is the way to go.

He does concede that assessing and applying thresholds are time-consuming and difficult for large-scale agronomists and farm managers, but the industry needs to think longer term.

“The dependency on a programmed approach got us into this situation, so we need to get away from that.”

‘Spraying insecticides should be last resort’

Kent grower Andy Barr believes growers need to stop reaching for the insecticide can and set their default decision to “not spraying”.

Mr Barr – whose farm is Linking Environment and Farming (Leaf) marque accredited – points out that growers are legally obliged under the European Sustainable Use Directive to demonstrate IPM practices, but too often are falling short.

“Demonstrating IPM by monitoring, counting insects and spraying when a threshold is reached isn’t enough, in my opinion, and it certainly isn’t proactive.

“We have had easy solutions in the past and they have done us proud by producing cheap food, but with resistance and regulation increasing we are being pushed into another way of working,” he says.

Mr Barr warns against letting the situation reach the crisis point of uncontrollable pests, but has been frustrated by the lack of credible IPM techniques available to growers in the UK.

Keenly researching the area to improve his own pest management, he says there are many methods with potential, but they are untested in a commercial environment.

“We need research funding to uncover more [IPM techniques], but who is going to pay for it? Ag-chem companies probably won’t, as it provides nothing to sell, so money from impartial sources will help,” he adds.

While Mr Barr keeps one eye on potential developments, he is carrying out his own research, which has included companion and trap cropping to reduce pest pressure in his oilseed rape.

Results have been inconclusive so far for reducing the effect of flea beetle and aphids, but he is continuing to experiment and hopes to further reduce the need for chemicals.

“They [IPM and biological methods] may not give you 100% control and every now and then we may be required to firefight, but we only want to use insecticides when we absolutely need to,” he says.

He is also treating all his winter wheat seed with Deter (clothianidin) and drilling later when aphid pressure is lower, cutting out the need for any blanket applications of pyrethroids.

“I think we need to build a suite of techniques into a whole system and accept more complex solutions, and potentially variability, than we have been used to.”