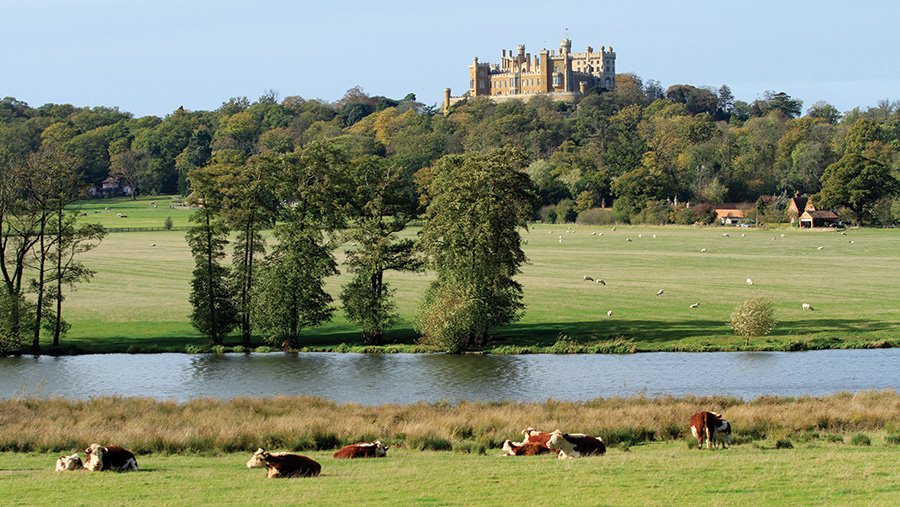 One of the biggest country estates is back in the black in part by taking over the direct management of more of its arable land and making sure it pays.

The once loss-making sprawling 6,600ha Belvoir Estate is being transformed by a sharper focus on farming, shooting and property, and the arable side is flourishing.

Arable land under management has nearly tripled over the past few years as short-term tenancies expired while, 10t/ha-plus wheat yields have helped profits return.

It took a sharp cut in the estate workforce and the sale of a family heirloom to kick-start the revival, but it has led to investment in new farm machinery and expansion into probably the country’s biggest shoot.

Philip Burtt was invited by Belvoir’s owner the Duchess of Rutland to advise on the estate’s shoot eight years ago and ended up talking on the whole estate.

“The engine room is now working, and so the estate is re-invigorated and starting to produce a profit,” Mr Burtt tells the Farmers Weekly at Belvoir Castle, the stately home perched on a ridge above the surrounding estate in north Leicestershire.

He says the Duchess is the driving force behind the estate’s revival with property revenue up 40%, shoot numbers up to 1,000 clients and bumper yields last harvest.

“Although cereal prices are down we are still making a good profit,” says Mr Burtt, adding that oilseed rape yields averaged an impressive 5t/ha and winter barley 10t/ha in 2015.

Mr Burtt started advising on the estate shoot in 2008 and began by improving the estate’s woodland and help lay 23 miles of roads to help get the guns closer to the partridges and pheasants.

Then, the in-house managed farm stretched to just 600ha in the rich Vale of Belvoir and was making a small loss with a history of poor management and a string of land agents, so Mr Burtt considered it too small for a hefty spend on new machinery.

When he took over the farm’s management, the existing machinery was sold off and he turned to contractors while he worked on bring back more land into management from short-term tenancies.

The over-reliance on contractors brought a problem with the timeliness of operations, and after land under management rose to close to 1,600ha it was time to invest in new machinery and grain storage.

The vigouressly growing hybrid barley varieties Bazooka and Volume together with a full herbicide programme helped control a bad blackgrass problem, while the early winter barley harvest meant next season’s oilseed rape could be drilled before the feed winter wheat was cut.

“We are now well on top of blackgrass which was getting very bad on some of the neglected fields,” says Mr Burtt.

The arable operation is now likely to stay at about 1,600ha as the rest of the farmed estate is with eight long-term tenancy agreements.

The arable side runs with a workforce of three, while one stockman looks after the 1,200 ewe flock and 70 fattening Hereford cattle on the 600ha of parkland.

The winter break from the arable workload means Mr Burtt has staff to help with felling and replacing woodland, and restoring the old Capability Brown-designed lakes and landscapes.

The improved woodland has helped revive the shoot which Mr Burtt described as “a hobby for his life”, as shooting was his passion on his own estate just north of Belvoir before he sold it in 2002.

He has replace 80ha of woodland, introduced 16ha of shelter belts and pushed shooting days up to 145 a year from 70 while managing to reduce the number of keepers by one down to four.

Fuel from the woodland now feeds a biomass boiler to heat the sprawling Beaver Castle, which consumer a trailer load of wood each week.

In addition, the estate has more than 300 properties, which have been in a renovation programme over the past four years and the rental income stream has increased by 30-40%.

The Duchess, Emma Rutland, is in charge of running this business empire, even more so since her separation from the Duke in 2012. Both still live in the castle, the Duke with a new partner and the Duchess with her partner Mr Burtt.

Tough actions were needed to get the estate back into profit and there were about 120 redundancies at the start of the process of getting it into a leaner fitter condition.

The sale of an oil painting by 17th century French artist Nicolas Poussin reportedly sold for £15m in 2010 helped finance the revamp, and with the estate now making a profit there are the funds if the one hectare of castle roof ever needs replacing.

Belvoir Castle is the stately home of the Manners family and the seat of the Dukes of Rutland. A Norman castle originally stood on site, while the current castle dates largely from the early nineteenth century.

The name Belvoir is a Norman import by the French-speaking invaders – meaning beautiful view – but the native Anglo-Saxon population were unable to pronounce such a foreign word preferring to call it “Beaver Castle” which persists today.

The 6,600ha estate includes 1,200ha of woodland. The estate manages nearly 1,600ha of arable land while the remaining farm land is in eight long-term tenancies. The estate owns about 300 properties, and runs various events such as weddings and country fairs.